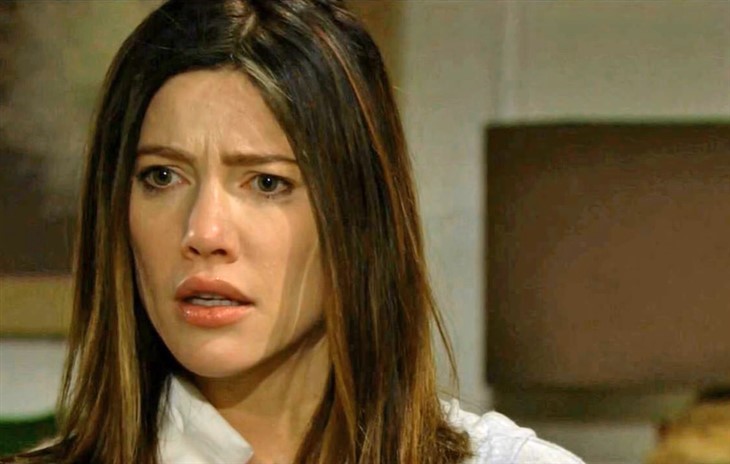 The Bold and the Beautiful spoilers document that Steffy Forrester Finnegan (Jacqueline MacInnes Wood) had a plan. Wood’s character told her parents she wanted to see Sheila Carter’s (Kimberlin Brown) face when she learned that her memory was back.

Taylor Hayes (Krista Allen) did not want to believe that Sheila could have shot her son and Steffy. Taylor felt terrible she could not determine Sheila was to blame for what happened in the alley behind Il Giordino.

Ridge Forrester (Thorsten Kaye) told Taylor not to overthink what happened. Sheila fooled many people after committing her crimes. For example, Ridge’s wife, Brooke Logan Forrester (Katherine Kelly Lang), had no idea what Sheila did then or on New Year’s Eve, which will also be pushed out due to this reveal.

The Bold And The Beautiful Spoilers: Sheila Stopped Once And For All? – Steffy Seeks Justice For Family

The Bold And The Beautiful Spoilers – Ridge Forrester Pushed Toward Decision

Ridge did not know that Steffy’s reclaimed memory would push him closer to making a decision about his love life. He remains married to Brooke, who he loves with all his heart.

However, as devoted fans know, Ridge decided to leave the Logan mansion and move into the cliff house. He felt it was best to separate from Brooke because she could not explain her returned pattern of disrupting their marriages.

Meanwhile, Ridge has allowed himself to be drawn back to Taylor, who he also loves.

Brooke’s actions with Deacon Sharpe (Sean Kanan) were inexplicable. While she supported Hope Spencer’s (Annika Noelle) reconnection with her father, Brooke is not in love with Deacon.

Ridge knows that Brooke is sincere when saying she and Deacon were not involved and she has no remnant feelings for him. She told that to Deacon in past months as well.

So, Steffy’s memory restoration and her reveal of Sheila as the murderer and shooter means that Brooke has a reason to believe Ridge will overcome his conflicted feelings and restart their marriage fresh.

The Bold And The Beautiful Spoilers – Taylor Hayes Begins To Worry

Taylor resisted allowing herself to believe reconciliation with Ridge was possible. She did not speak harshly against Brooke or interfere in his marriage to her.

But when Ridge told Taylor about the New Year’s eve event, Taylor sensed Brooke was falling again. Ridge voluntarily left Brooke and moved into the cliff house, where he felt at home.

Thomas Forrester (Matthew Atkinson) is teased to relay what Sheila told him about the champagne label switch. It will be reasonable for Taylor to begin worrying when that truth comes out.