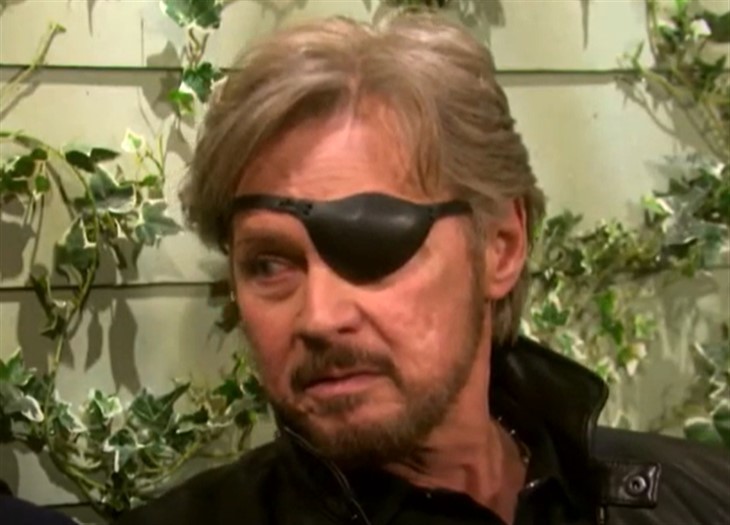 Days of Our Lives spoilers and updates tease that Steve Johnson (Stephen Nichols) will express doubt to Abe Carver (James Reynolds) that Paulina Price (Jackée Harry) killed TR Coates (William Christian). Steve picked up on something between her and Lani Grant (Sal Stowers) and he’ll tell Abe in an upcoming DOOL episode!

Steve noticed when he arrived to the bloody scene at Paulina’s apartment where Abe had a lot of blood coming from his head that Paulina confessed too quickly! He thinks that more than likely Lani was the one who pulled the gun on TR, and Paulina took the blame for her daughter not realizing the consequences. For one thing, forensics showed that the bullet came from Lani’s police revolver, she wouldn’t have let her mother shoot it, it would have been against protocol!

Steve can understand why Lani would shoot TR, seeing Abe bleeding out on the floor and figuring he was responsible and Paulina told him TR was getting ready to hit her! Abe agrees with Steve – there is no way Lani would have given Paulina her gun and Lani would have defended her mother.

Paulina risks a murder charge even though she says it was self-defense – Abe had walked in on Coates trying to make Paulina leave town with him in a big hurry! Abe tells Steve that he was trying to stop Paulina from leaving with Coates because he knew there was something Coates was running from and he was trying to stop it! Eli Grant (Lamon Archey) had just woken up from his coma and Coates got a call about it from Tripp Johnson (Lucas Adams) at the hospital. Abe and TR had argued over Paulina and TR hit him in the head with a bat, and at the point that Lani had arrived Abe was unconscious.

Days Of Our Lives Spoilers – The Truth Needs To Come Out, Lani Grant Was Defending Her Mother’s Life

Abe and Steve agree that the truth needs to come out and Lani was acting as she’d been trained, defending her mother’s life and not knowing if Coates had killed Abe. Either of them would have done the same thing, because seeing someone who could be dead on the floor and someone getting ready to hit another person, it’s a reflex. Everyone in any kind of law enforcement would have acted exactly the same way and pulled their gun to defend an obviously endangered person!

Abe is concerned that Paulina will be charged with murder because it’s such an easy win for District Attorney Melinda Trask (Tina Huang), who needs a high profile case. It wouldn’t be at all fair for Paulina to be hung out and dried and not even have a chance to be exonerated in court because of a DA’s ego!

Days Of Our Lives Spoilers: John Warns Jan Not To Stir The Pot With Belle https://t.co/rO1nlSf0xB #DaysofOurLives #Spoilers #DaysofOurLivesCast pic.twitter.com/vC230d6JQe

Abe determines to get the truth out of Paulina, and he’ll work on Lani too – Lani would have been acting on instinct and police training. Paulina may well have shot Coates if she’d had a gun to pull on him but the gun used was Lani’s! Trask might think she’s got a slam dunk with a willing confessor but the evidence would exonerate Paulina if it was brought in. There is no scenario where Paulina would have taken Lani’s gun unless Coates had it and she’d gotten it away from him but his body didn’t fall right.