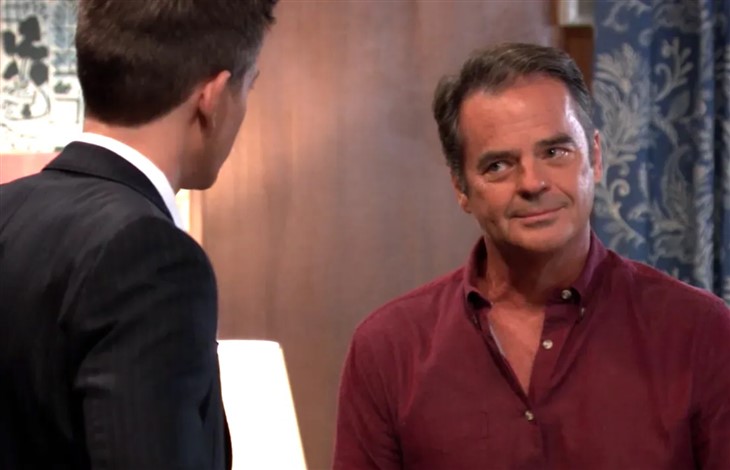 General Hospital spoilers and updates tease that Ned Quartermaine (Wally Kurth) will be offered a position in the new company formed by the merger of Aurora Media and ELQ. But an upcoming episode of GH will reveal Ned won’t like it!

Previous episodes of GH revealed Ned was livid when Drew Cain (Cameron Mathison) and Michael Corinthos (Chad Duell) decided to merge Aurora Media and ELQ without including him in the planning. Ned complained they left no place for him in the future of the company, and Michael and Drew had assured him he would have a place!

It would just take a little more time to get everything together, and reminded him why they were doing this, it was a power move to regain control. The merger would get Drew’s stock back from Valentin Cassadine (James Patrick Stuart) and control of the company back to the Quartermaines where it should be.

GH Spoilers – Ned Quartermaine Had Tried To Get The Merger Stopped

Ned had tried to get Michael and Drew to stop the merger, but they had already filed the necessary paperwork for the companies to merge and it had been approved. Ned was upset, he didn’t recall any voting being done or board meeting called, but those steps were skipped to try and stay ahead of Valentin. Again, he was reassured that it had nothing to do with trying to squeeze him out of the new company; it turned out Valentin did find out but too late. He was warned by his attorney Martin Grey (Michael E. Knight) if the Quartermaines remained a united front, he didn’t have a chance to regain control!

General Hospital Spoilers – When Are They Going To Announce The Top Positions?

Of course Ned expects to be a shoe-in for the top executive position as he was at ELQ, for the new company. However, Drew had founded Aurora Media with Sam Mc Call (Kelly Monaco) and half went to Jasper Jacks (Ingo Rademacher) when he disappeared and finally all to Michael. Ned was head of ELQ and begrudgingly accepted Valentin as part of the company even though he didn’t really make any executive decisions-but he made ELQ money.

Ned finally hears from Drew and Michael the day of the school festival after the Quartermaines have gathered to see Leo Quartermaine (Easton Rocket Sweda) recite his poem. Drew and Michael offer him a position in the new company, but it’s not what Ned expects and has nowhere near the power and prestige he expects!

GH Spoilers – What? Ned Quartermaine Will Work UNDER Them?

Ned isn’t at all happy when he is offered the position of Vice-President of Aurora/ELQ, under Drew and Michael, who are co-Chief Executive officers, meaning he works UNDER them! Ned really channels his mother Tracy Quartermaine (Jane Elliot) as he goes into a petulant snit, and his grandfather Edward Quartermaine (John Ingles) telling them they’ve failed the Quartermaine loyalty test!

Drew and Michael try to explain things delicately – this is an old company but also a new company with new goals, new ideas. They’re trying to attract newer, fresher, RICHER clientelle-they could add “Emeritus” to the end of Ned’s title if he wants; THAT goes over like a lead zeppelin! Drew tells Ned to think it over and let him and Michael know!