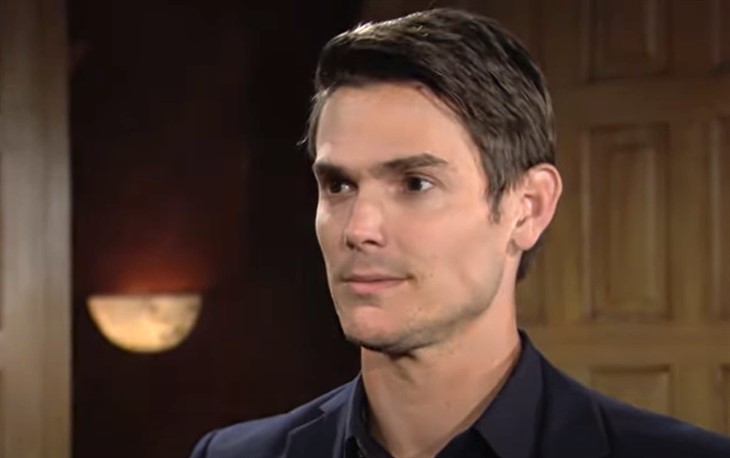 The Young and the Restless spoilers document that Adam Newman’s (Mark Grossman) plan to reunite Victoria Newman (Amelia Heinle) with Ashland Locke (Robert Newman) is realistic. Both halves of that one-time married couple still care about each other. So, Adam and Sally Spectra’s (Courtney Hope) hopes are legit.

Adam played Ashland at Society without the Lockeness Monster realizing it. Sally congratulated Adam on making his dig about Victoria. That was intended to encourage Ashland not to give up on renewed love.

Victoria sees Victor Newman (Eric Braeden) as her father, not Adam’s. Nevertheless, Adam is as much Victor’s child.

With however they think of each other, Adam is counting on Victoria and Ashland’s bond not being broken. If the hint of reconciliation exists or happens, Victor would be outraged. That is step two of the plan.

Adam wants Victor to be distracted by Ashland again. Her connection to him initially was something Victor was highly skeptical of. But she came to believe that Ashland loved Victoria.

As the story line played on, Victor decided that Ashland’s fake cancer reveal confirmed initial feelings. Ashland could not be trusted, and Victoria had to get rid of him.

Victoria did realize the end of her marriage and the exit of Ashland from Newman-Locke. But both results did not happen because of Victoria’s plan. Her scheme to bait Ashland into sabotaging Adam did not work.

Adam countered with a plan of his own. Thinking stream of consciousness, Adam offered Ashland a payoff. He took it after questioning Victor, determining that the Moustache may not have been the origin source of the half-billion-dollar payoff.

Ashland’s agreement to leave the merged company and annul his marriage to Victoria appeared to signal the end of his days in Genoa City, Wisconsin. That anticipated outcome has not resulted, with the Newman’s believing Ashland wants more, and he does.

The Young and the Restless News: Eric Braeden Is Lashing Out On Twitter For This Reason #YR #YoungandRestless

Victoria is wondering if Ashland is telling the truth about falling in love with her. Nikki Newman (Melody Thomas Scott) thinks it could be true, but is cautioning her daughter not to forget what Ashland did on Y&R.

Meanwhile, Adam is onto something. He is right in believing Victoria may not be done with Ashland. If she is not, Newman Enterprises’ power could eventually shift again.