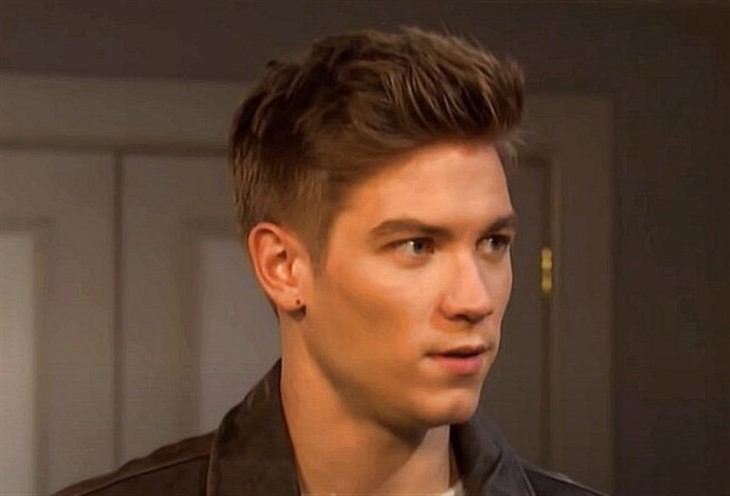 Days of Our Lives spoilers and updates tease that Tripp Johnson (Lucas Adams) will make the ultimate sacrifice to save Allie Horton (Lindsay Arnold) in an upcoming episode of DOOL!

Ciara and Ben Weston (Victoria Konefal, Robert Scott Wilson) get to the cemetery just in time to interrupt AllieDevil’s ritual where their newborn Bo Brady Weston (unnamed infant actor) was the subject. AllieDevil had resurrected Charlie Dale (Mike C. Manning) and was going to let him raise the baby, who satan would totally inhabit ala “Rosemary’s Baby”. Johnny DiMera (Carson Boatman) arrived where baby Bo was in a basket in the center of a pentagram; Charlie knocked Johnny out cold!

Ciara and Ben arrive next, and Ciara tells AllieDevil to get the hell away from her son, and as Ben walks into the pentagram he’s knocked out! However, Ciara succeeds as a bright white light surrounds her body and she rescues the baby; by this time Johnny is awake and chases after a fleeing Allie.

Johnny continues to chase after Allie, and then Tripp, who’s been talking to his dad Steve Johnson (Stephen Nichols) and Kayla Johnson (Mary Beth Evans) heads to the cemetery. He doesn’t know Allie is no longer there but faces a blast from the past, which is probably Charlie, likely dematerializing with AllieDevil gone. Tripp catches up to Johnny and they continue to track Allie together, and finally find her in St. Luke’s Church in the loft, getting ready to burn it down. Soon, Eric Brady, (Greg Vaughn) John Black (Drake Hogestyn) and Marlena Evans (Deidre Hall) arrive and attempt an exorcism but the devil threatens to kill Allie! Tripp pleads with the devil to take him instead, in an effort to save Allie’s life, willing to do anything including sacrificing himself to save her!

Days Of Our Lives Spoilers – The Devil Jumps Into Tripp Johnson

Then, predictably, the devil jumps into Tripp, and demands that he kill Allie, but Tripp’s will is stronger than the devil and he can fight him and slow him down! However, Tripp continues to battle a strong inner conflict as he tries to figure out how he can put a complete end to this without risking anyone else’s life. Tripp is absolutely selfless when he makes the decision, much as Susan Banks (Stacy Haiduk) did when she stabbed herself instead of John, to jump out of the church tower window!

All Tripp has in his mind is to free Allie from the devil even if it means making the ultimate sacrifice – his own life! Perhaps then the devil will be satisfied and leave Salem and all his friends and loved ones alone!

Johnny and Marlena take Allie home, while John takes Tripp to the hospital. Tripp’s mother, Ava Vitali (Tamara Braun) arrives after getting the emergency call and is devastated when she learns Kayla can’t save him. Ava lashes out at both Kayla and Steve, who breaks down and mourns their son. However, there is a last minute divine intervention as shown in this week’s Days Of Our Lives preview. Ciara had prayed to her late father, Bo Brady (Peter Reckell) to save his grandson; perhaps it was his presence that enveloped her in the bright light. Steve looks up in tears to see his old friend Bo enveloped in a bright light, and he smiles and nods – it sounds like Bo brings life and healing to Tripp!