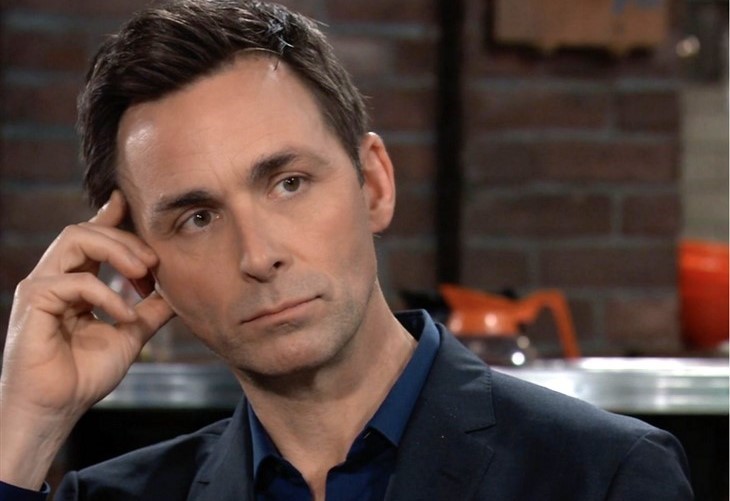 Previous GH episodes revealed that Ned thinks Drew Cain (Cameron Mathison) and Michael Corinthos (Chad Duell) are pushing him out of ELQ/Aurora Media, the new merged company. He was irate when he talked to his daughter Brook Lynn Quartermaine (Amanda Setton) and even more disturbed that she heard about the merger from Michael before he did! Drew and Michael assured him he would have a place in the new company, but he’s upset when the offer isn’t what he thinks he should get!

Ned is offered a COO – Chief Operating Officer – position by Drew and Michael when he expected to remain CEO over the whole merged company. As he is stewing in his juices over that offer that sounds like a consolation prize, he gets a text from Valentin wanting to meet.

Drew, Michael, and Ned are at the Port Charles Elementary School fair where Leo Quartermaine (Easton Rocket Sweda) read a poem and Scout Cain (Ella Ramacieri) made an exhibit. Ned sneaks out to see what Valentin wants, feeling rejected in a business sense by his family members – and curious to see what Valentin has to say. Ned approaches the meeting not exactly receptive since he is family first and doesn’t like a Cassadine in their family business. But even though the merger dilutes Valentin’s stock – Ned feels pushed aside so he agrees to listen to his idea. Ned is playing right into Valentin’s hand, unknowingly, because Valentin knows he’s feeling pushed out and that’s why he wanted to meet!

Ned goes into the meeting with Valentin willing to listen to him, but still wary – Valentin makes no bones about it wanting Ned’s support so Valentin won’t be pushed out. But at the same time, Valentin cleverly makes a point of connection with Ned because he understands Ned is also being pushed aside and he feels Ned is being disrespected. If the two of them work together to hold onto their power positions – even if they were to act as co-CEOs they’ll still have a say in the new company.

If they don’t, then they could both be out on their rears and at the best, figureheads. Plus, their own stocks in the companies will be greatly diluted, and Michael and Drew could push much harder.

Ned leaves the meeting with Valentin with a lot to think about – and even though Ned is family first, so is Valentin. Valentin talked about family being important to him also, as another relating point, something they have in common. Ned isn’t sure whether to take him up on his offer or not – it is attractive since neither would lose their power or influence if they teamed up. It’s a real struggle to allow himself as a Quartermaine to accept a Cassadine as a partner, however, especially with the Cassadines’ reputation of duplicity!