The Bold And The Beautiful Spoilers: Steffy And Brooke Vindicated – Sheila’s Reveal Feels Off 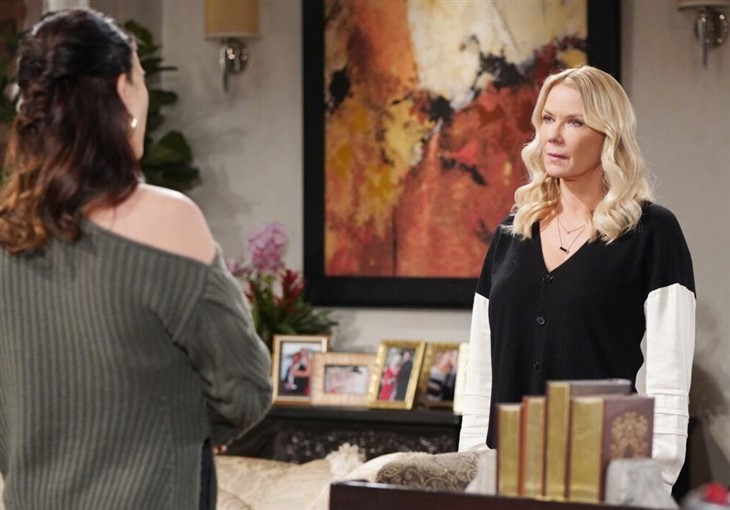 The Bold and the Beautiful spoilers document that Steffy Forrester Finnegan (Jacqueline MacInnes Wood) got what she wanted. No one took Steffy as seriously as they should have on B&B. But Wood’s character has been vindicated by Sheila Carter’s (Kimberlin Brown) voluntary admission of shooting her and John Finn Finnegan (Tanner Novlan).

While Steffy’s recalled memories did not make Sheila’s reveal a surprise, it was still stunning to hear her cop to the crimes. Ridge Forrester (Thorsten Kaye) has been Steffy’s staunchest supporter.

However, Ridge might blame himself for not insisting that Sheila have no contact with his family since she appeared at the wedding reception at the Forrester mansion.

The Bold And The Beautiful Spoilers – First, The Shooting Details

Television connoisseurs know that old school detective shows often resolved all conflict by the end of an episode. A more lighthearted follow-up scene often completed many broadcast TV classics in days gone by.

Soap fans embrace the serialized format, riding a story arc for months. Viewers have been anticipating Sheila’s reveal. The anticipation is in waiting to see how it is done.

So, having Sheila go to the cliff house in an attempt to see Hayes Forrester Finnegan (Samantha Worden and Piper Harriet) was the setup. Steffy was able to reclaim her blocked memories of what happened in the alley behind Il Giordino, and then Ridge lambasted Sheila, which caused her to blurt out the truth.

B&B Spoilers – But Why Admit To Sabotaging Brooke Logan Forrester?

Sheila had time to collect herself after realizing that she made a mistake admitting to being the shooter. If she had not done that, it is plausible to believe that there might not have been enough or any hard evidence to make charges stick or convict her.

But Sheila was in explanation mode, telling Taylor Hayes (Krista Allen) that she went to great lengths to help restore her family. Sheila actually believed that she was helping Taylor, Ridge, and Steffy.

The Bold And The Beautiful Spoilers – Sheila Carter Wrapping It Up

Various TV shows from days gone by wrapped their episodes by having the typical bad guy get caught or reveal himself. Now, Sheila been exposed and then admitted what she did with details.

It feels off to have Sheila divulge the information about Brooke. She could have held that card while offering her patented laugh from behind bars.

It appears as though TPTB are in the late stages of concluding another Sheila story on B&B. The villain was tagged and explained her story. All that is left is for the credits to roll, with no lighthearted follow-up to follow in this instance.