The Young And The Restless (Y&R) Spoilers: Diane And Michael’s One Nighter Pushes Lauren And Jack Together? 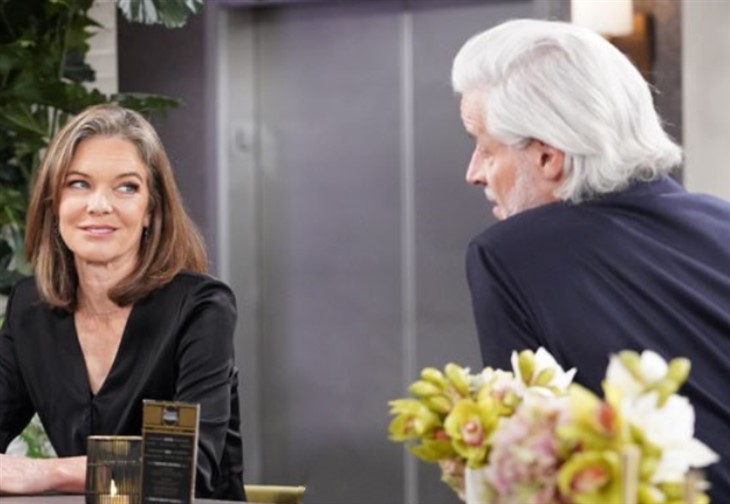 The Young and the Restless (Y&R) spoilers tease that Diane Jenkins (Susan Walters) is back in town and undead, and Michael Baldwin (Christian LeBlanc) is in the minority by not having a horrific reaction to her. Will Diane come between Michael and Lauren Baldwin (Tracey E. Bregman)?

What does a girl have to do to get a welcome in Genoa City, Wisconsin? Michael didn’t throw the vixen a welcome party but he admitted it was good to see Diane undead. Diane was suspicious given all the pushback she’s been getting and understandably so. But that smile of Michael’s convinced her he was sincere and that led to Diane and Michael having a cocktail when rampaging bull Phyllis Summers (Michelle Stafford) saw it all!

Phyllis has it out for Diane and seeing her bestie with the she-devil caused her some concern. For one thing Diane is trouble, and for another there could be trouble brewing in Lauren and Michael’s marriage. Not too long ago he went to Peru on assignment for Victor Newman (Eric Braeden) and was almost killed. Lauren was at turns furious and scared stiff before she finally saw her man pop back up in Genoa City. Explosive show spoilers reveal that Victor and Michael will again collaborate which could place Lauren on the war path. If so, would Michael find comfort in the arms of Diane?

The Young And The Restless Spoilers – Diane Jenkins Is A Vixen

Diane is also in need of comfort these days. No one seems too terribly happy to see her and her son Kyle Abbott (Michael Mealor) and baby daddy Jack Abbott (Peter Bergman) are all kinds of conflicted about her presence.

Diane swears she has changed, but aren’t those stripes showing through her designer duds? She is a bad girl and if push came to shove she may prove that with Michael. If a one-night stand between Diane and Michael happens, would Kyle ever be able to forgive her? There is a lot at stake, but if Diane and Michael tango, who says that anyone has to know?

The Young and the Restless News: Eric Braeden Is Lashing Out On Twitter For This Reason #YR #YoungandRestless

A hot hookup could potentially lead to tons of fireworks and consequences because nothing stays secret on soaps for long. If Lauren found out the truth she would be livid and if Jack discovered such a thing happened, he could demand she leave town. One thing is true, and that is that Michael is being nice to Diane and that could spell trouble with a capitol T during May Sweeps.