The Bold And The Beautiful Spoilers: Sheila Right That Steffy Is To Blame? – Finn Alive If Compassion Offered 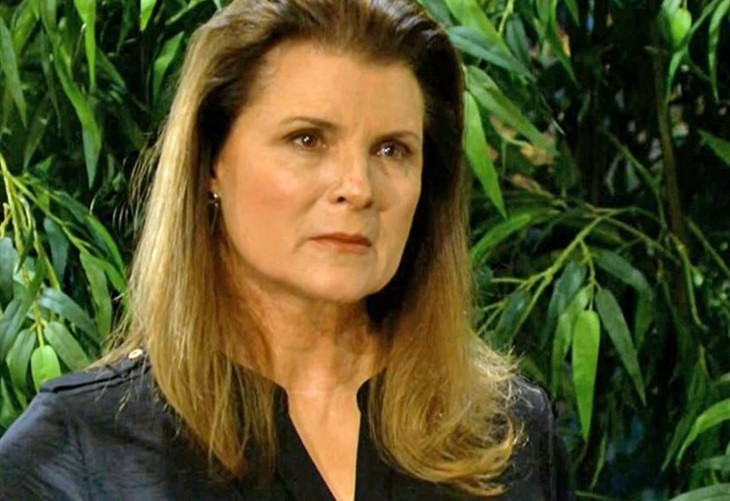 The Bold and the Beautiful spoilers document that Sheila Carter (Kimberlin Brown) is claiming John Finn Finnegan (Tanner Novlan) would be alive if not for Steffy Forrester Finnegan (Jacqueline MacInnes Wood). How outrageous or a topic worth exploring?

Viewers know that Sheila committed many criminal acts in daytime days gone by. But each act can be considered individually, or as in the cast of past multiple shootings, in pairs.

Steffy chased Sheila into the alley after chewing her out about the champagne label switch. Suddenly, Steffy appointed herself Brooke Logan Forrester’s (Katherine Kelly Lang), as Sheila implied while being recently grilled at the cliff house in front of Ridge Forrester (Thorsten Kaye) and Taylor Hayes (Krista Allen).

Sheila said that blood is on Steffy’s hands, meaning that Finn is dead because Brown’s character was provoked. Sheila truly believes that she had a right to shoot Steffy because she confronted her about the label switch and, more importantly, was going to prevent her from having a relationship with Finn and Hayes.

Yes, blood was on Steffy’s hands. But that happened because she was consoling Finn as he was bleeding profusely.

Sheila’s son was bleeding to death because she shot him while attempting to shoot his wife, Steffy.

B&B Spoilers – Taylor Hayes Could Have Made A Referral

Sheila believes she received compassion from Taylor. Yes, but it was contingent on Allen’s character psychologically assessing Sheila.

There was a point in the story when Sheila asked Taylor to serve as her therapist. Taylor declined because she was one of Sheila’s shooting victims when Hunter Tylo (Taylor) was on B&B.

However, it is fair to suggest that Doctor Hayes should have referred Sheila to a psychiatrist colleague. Whether Sheila would have gone and what might have resulted can never be known.

The Bold And The Beautiful Spoilers – Addressing The Compassion Issue

Sheila genuinely believes that Finn would be alive if Steffy would have been compassionate. That statement serves as a reinforcer, with the point being that Sheila is incapable of thinking rationally.

The Bold and the Beautiful Spoilers: Sheila Fights For Her Freedom – Will She Win? #bb #BoldandBeautiful

Also, Sheila would have shot and potentially killed Steffy if Finn did not arrive. Sheila left that point out of her cowardly explanation.

Steffy fiercely opposed Sheila’s involvement with her family because of the violent, criminal acts committed across many years. Steffy’s rational fear of the damage Sheila might cause was then horribly realized by what happened on that fateful night at Il Giordino in what was one of B&B’s darkest ever climaxes.