The Young And The Restless Spoilers: Adam And Sally Succeed Too Easily – Victoria and Ashland Are Manipulated 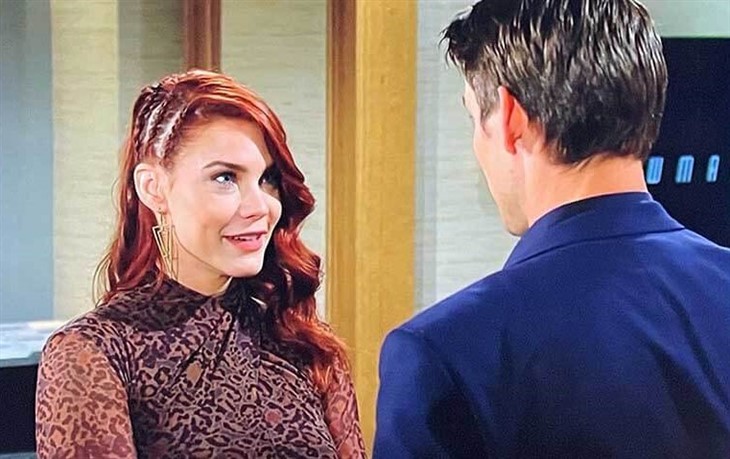 The Young and the Restless spoilers document that Adam Newman (Mark Grossman) and Sally Spectra (Courtney Hope) have shifted to their next plan. They are playing mind games with Victoria Newman (Amelia Heinle) and Ashland Locke (Robert Newman), intending to reunite this couple.

Viewers noticed how easily persuadable Victoria and Ashland have been to the power of suggestion. Their combined reactions are directly connected to each person’s existing feelings for the other.

While Ashland does not doubt that he still loves Victoria, Heinle’s character is conflicted. As the conversation with her mother is revealed, Victoria is wondering whether Ashland’s love for her is real?

The game is to have Victoria make Victor Newman (Eric Braeden) doubt his oldest daughter’s judgment. The desired outcome would see the Moustache depose Victoria as Chief Executive Officer, with Adam presumably taking over.

Of course, there is the matter of Nikki Newman (Melody Thomas Scott) being the co-CEO. But that is an issue Adam and Sally will address when their effort presumably leads to success.

Adam worked on Ashland first, spotting him at the Society bar. Newman’s character entered a period of wallowing, which is believable. He lost his love and is grieving.

It is a bit of a stretch to have Ashland be led by Adam. Newman’s character is not off his game to such an extent that he would accept Adam’s suggestion that Victoria is not over him at face value.

Adam’s effort worked because it reflects reality, yet Ashland’s inability to see through the message was noticeable.

Sally saw Victoria sitting at the bar, just as Ashland did. Hope’s character knew the opportunity had to be taken advantage of, so she pounced.

Complimenting Victoria on her resilience elicited a genuine response from Heinle’s character. Victoria was surprised that Sally seemed to be sincere.

However, having Sally say that she is okay with remaining as Newman Media’s Chief Operating Officer laid on the schmaltz. But like Ashland, Victoria was not suspicious of Sally. She also did not recognize the intent of that pitch.

The Young And The Restless Spoilers – A Reunion Happens Or Not?

Adam and Sally’s chat sessions will not be the reason why Victoria forgives Ashland or not. But the mind games will have served as the glide path to a door is reopened.

It would seem preposterous if Victoria takes Ashland back soon. Several months should pass if TPTB is writing this couple through to reconciliation. But the plot is sometimes pushed in the soap world.