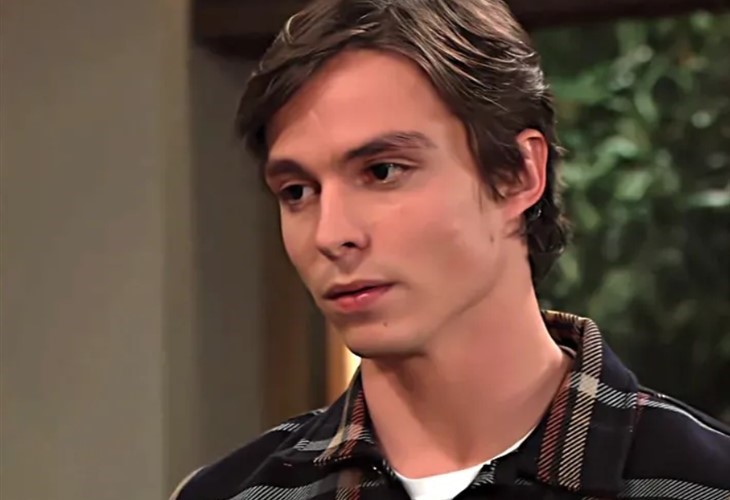 General Hospital (GH) spoilers tease that Spencer Cassadine (Nicholas Chavez) recently did some sleuthing in his girlfriend Esme Prince’s room at Wyndemere. He was looking for proof that Esme is the person who framed Trina Robinson (Tabyana Ali) for recording Cameron Webber (William Lipton) and Josslyn Jacks (Eden McCoy) having sex and then posting it on the internet. Spencer found more than he ever could have imagined, and he may need the help of a professional investigator. Look for him to ask Samantha McCall (Kelly Monaco) for her help!

Hidden away in a box of Esme’s things was a pill bottle. Spencer didn’t know what the pill was so he took it to Dr. Britt Westbourne (Kelly Thiebaud). She matched the drug to its identification number. Britt grew concerned when the drug turned out to be a powerful narcotic. Spencer asked what the drug would do if mixed with alcohol. The symptoms that Britt described made Spencer realize that Esme drugged Trina the night the video was recorded so she couldn’t account for her whereabouts. Whether that will be enough to exonerate Trina remains to be seen. But that wasn’t the only thing Spencer found among Esme’s things.

Esme had told Spencer previously that she hadn’t been in contact with her nanny, Maggie, in many years. And yet, Spencer found letters from Maggie hidden away with the pills. Of particular interest was the fact that Maggie warned Esme that no good could come from Esme making contact with her biological father. This set off an alarm in Spencer’s head because the letter made it sound like Esme knew who her father was, which Esme denied. But as viewers know, Esme knows exactly who her father is. Serial killer Ryan Chamberlain (Jon Lindstrom), who is imprisoned in Spring Ridge has been revealed as Esme’s father. Esme has been meeting with Ryan on a regular basis inside the prison.

Esme has not only made contact with Ryan; she is actively following his orders. His latest order is for Esme to seduce Spencer’s father, Nikolas Cassadine (Marcus Coloma) in order to break up Nikolas’ marriage to Ava Jerome (Maura West). In the meantime, Spencer didn’t believe Esme’s claim that she cut off contact with Maggie when Maggie couldn’t tell Esme who her father was. Look for Spencer to turn to Sam to find Maggie. Sam is a successful Private Investigator so if anyone can find Maggie and find out what she knows about Esme, it would be Sam. But how will Spencer react when he finds out that he has brought the daughter of a serial killer into his home and the lives of his family and friends!

Does Spencer have enough proof to exonerate Trina? Can Sam help Spencer find Maggie? And will everyone soon find out who Esme really is? Anything can happen in Port Charles so stay tuned to General Hospital airing weekdays on ABC. And don’t forget to check back right here regularly for all your General Hospital news, information, and spoilers!