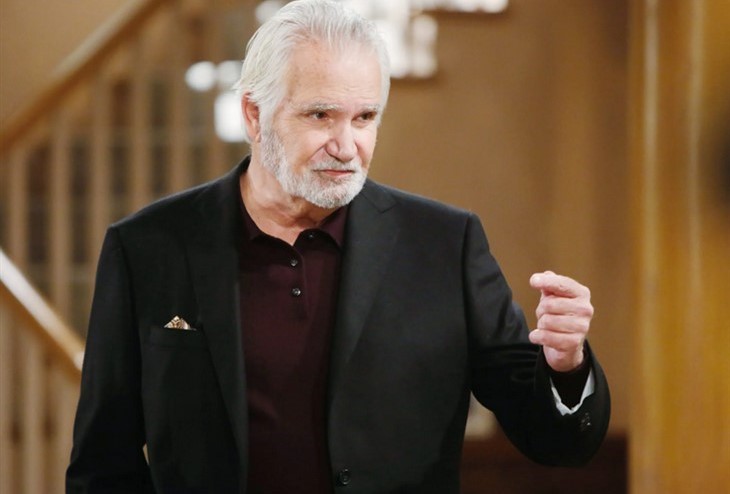 The Bold and the Beautiful (B&B) spoilers document that Eric Forrester (John McCook) decided that he had enough of Quinn Fuller (Rena Sofer). So, he contacted the ever-appealing Donna Logan (Jennifer Gareis).

Fans were surprised when first seeing Eric and Donna. Their romantic reconnection seemed blocked a handful of months ago when Eric decided to forgive his wife.

Now, a new wrinkle is emerging. Along with Zende Forrester Dominguez (Delon de Metz) living with his grandfather and Quinn, Ridge Forrester (Thorsten Kaye) is moving back in. That puts an extra set of eyes on Eric.

The Bold And The Beautiful Spoilers: Sheila Right That Steffy Is To Blame? – Finn Alive If Compassion Offered

The Bold And The Beautiful Spoilers – Head-Fake To Quinn Fuller

Scenes that put Quinn and Carter Walton (Lawrence Saint-Victor) together served as a skilled head fake. It was natural for viewers to believe that they might be getting back together and that still might happen.

But TPTB were directing viewers’ emotions in one direction while preparing to drop the Eric-Donna reveal in another. Kudos for that bit of soap.

Of course, Quinn’s assumed eventual awareness of Eric’s betrayal lies ahead. Will she want to stay with Eric if the Donna reconnection is revealed? Maybe that reconnection to Carter follows at that point in the plot.

Ridge became involved with Quinn several years ago. They kissed on the beach while Brooke gawked at them from a hidden location.

The above story line felt a bit pushed, as compared to the Quinn-Carter and Eric-Donna connections. Those pairings and re-pairings make sense in the plot contexts in which they are occurring.

So, having Ridge leave the cliff house and return to the Forrester property makes sense. He needs a secure location where he can decide on his love life. But this move is happening so he can become aware of his dad’s adventures with Donna, right?

The Bold And The Beautiful Spoilers – What Does Eric Forrester Want?

At this stage of his life, Eric must want peace of mind. His happiness has not been in place with Quinn, though he does still care about her.

Donna has long brought Eric pleasure. But is her electricity strong enough to help him pull the plug on Quinn?

Hopefully, Ridge helps his adopted father, who he rightly thinks of as his real dad, to navigate these significant decisions. As that happens, Eric will likely help Ridge decide what is best on B&B as well.