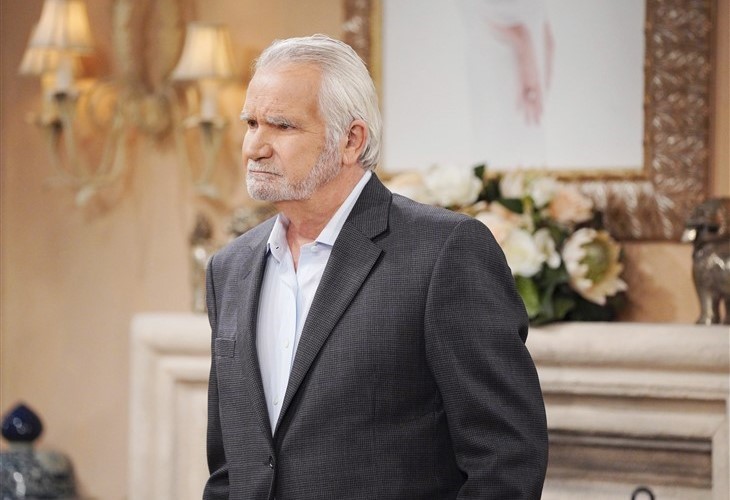 The Bold And The Beautiful Spoilers indicate that Eric Forrester’s (John McCook) affair with Donna Logan (Jennifer Gareis) could be exposed soon. Quinn Forrester (Rena Sofer) had got a ring for Eric to keep up with his heart condition. However, Eric’s changes in heart rate could bring on the wrath of a scorned Quinn.

The Bold And The Beautiful’s Eric thought that Quinn was just giving him a nice gift when she produced this new ring. Quinn doesn’t want Eric to know that she is worried about his health so she is secretly monitoring him. Eric will once again lie about playing pickleball and rush off for his tryst with Donna. Of course, Eric’s heart rate will spike at certain points so Quinn may not be instantly concerned. However, Quinn could drop by the club to watch Eric’s game and find out he hasn’t been playing pickleball at all. Will that discovery set off a red flag in Quinn’s mind?

The Bold And The Beautiful’s Quinn has already brought Carter Walton (Lawrence Saint-Victor) in on her plot to observe Eric’s health. However, Quinn may further involve Carter by asking him to spy on Eric as well. Could Carter discover Eric’s affair and report back to Quinn? Will Carter be compelled to keep quiet because he already betrayed Eric once? Will Carter stumble upon Eric’s affair with Donna while trying to help Quinn? Could Eric swear Carter to secrecy if he discovers the truth?

The Bold And The Beautiful Spoilers – That Ring Has A Purpose

The Bold And The Beautiful writers did not introduce that health monitoring ring for no reason. Perhaps Quinn never had a voice-activated alert installed in the ring that Eric accidentally kicks on. Could Quinn be treated to a play-by-play conversation between Eric and Donna without his knowledge? Eric’s ring will undoubtedly lead to his affair with Donna being discovered. Quinn could keep quiet and corner Donna without Eric’s knowledge as well. After all, has Eric not vowed to protect Donna from Quinn’s crazy side? How can Eric protect Donna if he doesn’t know he needs to?

Quinn has already made sure that Eric fired Donna from Forrester Creations. Quinn has threatened Donna more than once already. Will Quinn follow through with her threats this time? Can Eric protect Donna before Quinn takes her out for good?