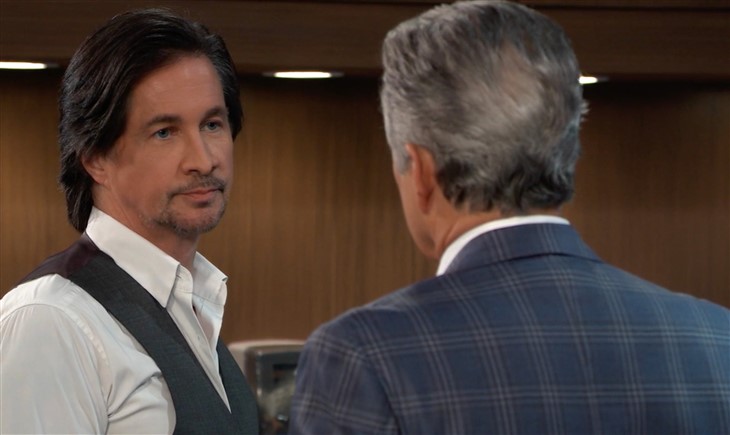 General Hospital spoilers and updates tease that Hamilton Finn (Michael Easton) and Gregory Chase (Gregory Harrison) think that Violet Finn’s (Jophielle Love) onto something. Precocious little Violet has noticed something about Elizabeth Baldwin (Rebecca Herbst) and wonders in an upcoming GH episode if she’s got an imaginary friend!

General Hospital Spoilers – It Began With A Migrating Wedding Ring

Elizabeth Baldwin (Rebecca Herbst) has had weird things happening ever since Valentine’s Day, when she and Hamilton Finn (Michael Easton) had planned to go on their first real date! That night, she had taken the dress she had planned to wear along to work, and found her wedding ring from Franco Baldwin (Roger Howarth) in the pocket! Earlier that day, she had finally taken it off only to have it slip down the kitchen drain and Finn “operated” on the drain pipe and retrieved it.

Elizabeth couldn’t figure out how the ring got there unless one of her boys put it there, disapproving of her moving on with Finn. But all the boys denied it, and even though Jake Webber (Hudson West) was the prime suspect, he was soon cleared.

Aiden Spencer (Enzo DeAngelis) soon came up with a theory that Franco’s ghost might be haunting Elizabeth, and even ordered a Ouija board he wasn’t supposed to. After talking to Lucy Coe (Lynn Herring) Elizabeth tried a séance, with a medium Lucy recommended, Chelsea Lam (Jen Ray), and seemed to get a message.

But it was only loving advice that she needed to have peace to be able to move on, which would have been more Franco-like than that scary poltergeist! When Violet comes up with a theory about Elizabeth’s invisible friend, it sounds like maybe she overheard something Finn wouldn’t have wanted her to, but Aiden could have told her!

Violet hasn’t seen her grandpa, Gregory Chase for a while, but he’s come back to Port Charles and they have some fun at Kelly’s and catch up. Violet might talk about her aunt Elizabeth having an invisible friend, and that might be a head-scratcher for Grandpa Greg, since he’s used to little boys, not little girls. Not many little boys talk about invisible friends for some reason, little girls are much more likely to have them and talk about them, especially to adults.

This could be something where girls are much more in tune with playing with dolls than boys, and Violet makes her stuffed animals come to life in her mind too! But Greg thinks he should let Finn know his daughter’s theory about Elizabeth having an invisible friend so he talks to him about it.

When his father tells him about Violet saying Elizabeth might have an invisible friend, a light bulb goes off; he really doesn’t want to think she could be that ill. However, if she had developed dissociative identity disorder, having an alter could explain what has been happening, since no one has been detected on any security cameras.

Elizabeth has been alone when most of these strange occurrences have happened, and a person doesn’t remember what they do under the control of an alter. “Alter” is a term for an alternate personality who emerges in a person’s psyche to help them cope with a trauma, some people can have several in a severe case. This also makes sense to Greg, and Elizabeth has been resistant to talking to Kevin Collins (Jon Lindstrom)- also common in this disorder, the doesn’t want to be exposed!