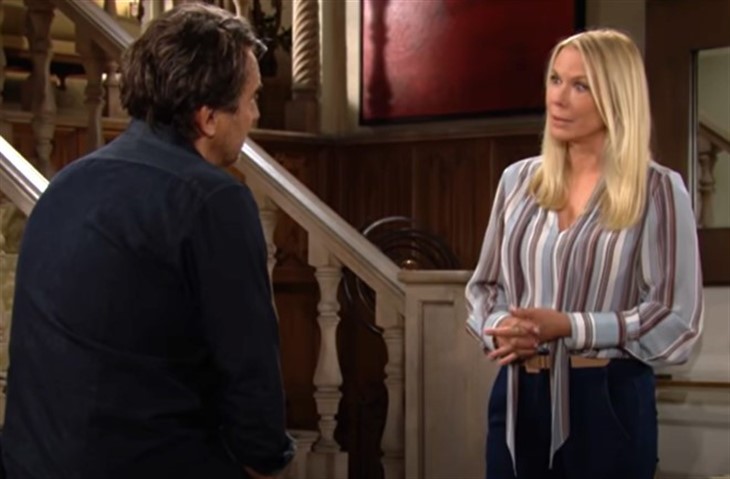 The Bold and the Beautiful spoilers document that Brooke Logan Forrester (Katherine Kelly Lang) now knows why she was triggered to drink. Sheila Carter (Kimberlin Brown) served her alcohol, as Ridge Forrester (Thorsten Kaye) told the love of his life.

The rub, as Steffy Forrester Finnegan (Jacqueline MacInnes Wood) and Taylor Hayes (Krista Allen) discussed, was how this part of Sheila’s reveal may impact Ridge’s romantic future. Will he feel that Brooke is vindicated, eventually forgive her generally modest transgression with Deacon Sharpe (Sean Kanan), and reconcile?

Ridge is teased to move back in with his father, leaving the cliff house’s guest house. He has a decision to make about which woman, Brooke or Taylor, he wants to be with and needs a touchstone setting to do so.

The Bold And The Beautiful Spoilers – Sheila Carter Has Thin Skin

Why didn’t Sheila realize that Brooke’s threats were weak?

As hardcore fans recall, Brooke threatened Sheila just before New Year’s Eve at Il Giordino. Lang’s character told Sheila that she would do whatever was necessary to block her from having a relationship with John Finn Finnegan (Tanner Novlan), Hayes Forrester Finnegan (Samantha Worden and Piper Harriet), and Steffy.

In one of Sheila’s more logical moments, she wondered aloud why Brooke was interfering with a family matter that was not her business?

Brooke does have a history of involving herself in other people’s lives. Sheila had none of that and quickly plotted and exacted a revenge plan, which was a terrible overreaction. Brooke did not influence Finn or Steffy, as Brown’s character should have known.

Sheila shot Steffy for warding her off Finn and Hayes. So, Brooke is fortunate that Sheila did not use her gun or some other implement to injure or kill her.

The Bold And The Beautiful Spoilers – Loose Jail Visitation Rules

Brooke is teased to visit Sheila in the pen. While that meetup is preposterous on its face, it will make for good soap.

One of the few topics that Brooke and Steffy agree on is Sheila. While of lesser importance than Steffy’s verbal takedown of Sheila at the cliff house, Brooke’s tongue lashing is memorable.

It appeared as though Sheila was bidding farewell to the audience when Steffy said she could say her peace before being hauled off by the police officers under Deputy Chief Bradley Baker’s (Dan Martin) command. However, Brooke gets some face time with one of soap’s greatest of all-time villains.