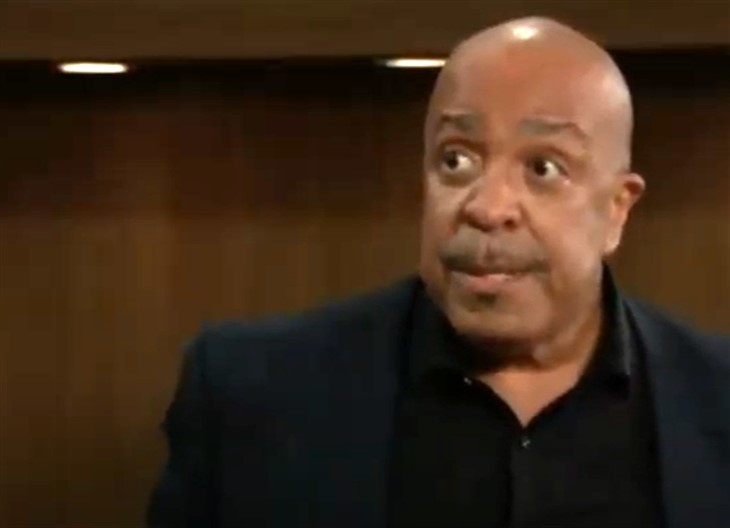 General Hospital spoilers and updates tease that once Curtis and TJ Ashford (Donnell Turner, Tajh Bellow) get Marshall Ashford (Robert Gossett) under control they’ll take him back to Port Charles. As Curtis and TJ support Marshall, who’s hospitalized in GH, he’ll get an unexpected visitor!

Viewers will remember that things took an intense turn in Brooklyn and TJ had to calm things down; Marshall seemed to be in a bad way!  By the time Curtis got there, TJ found Marshall’s medication, and that gave TJ a lot of answers when he found Marshall was taking risperidone. Risperidone treats schizoaffective disorders such as schizophrenia and bipolar disorder and apparently he was off his meds, so they got him medicated and TJ put him in GH.

Marshall had been living in Brooklyn under the name of Marshall Parker and apparently had for years, except for that short time he lived in South America. Curtis never could get him to explain how he got there, but some answers come little by little like how he seemed to know Sonny Corinthos (Maurice Benard).

Marshall’s family rallies around him as he recovers and his medications get back into his system, intravenously –quicker than taking pills although they got a pill into him before leaving Brooklyn. Being off his meds for several days he’d become combative and panicky, and had those chest pains again and passed out; like before, it wasn’t his heart. It was just a panic attack; they may not have gotten him into the car if it weren’t for that, and 911 wouldn’t take him to Port Charles! TJ, Curtis, Portia Robinson (Brook Kerr) watch over him in his room and Epiphany Johnson (Sonya Eddy) takes over his exclusive nursing duties. Doing a search on the name “Marshall Parker” in Brooklyn turns up some interesting information for Curtis, still wanting to know his father’s past.

Curtis isn’t the only one whose father had a missing past – so did Sonny, but not knowing a lot of Mike Corbin’s (Max Gail) life was on him! Longtime viewers will remember when Mike first came to Port Charles, Luke Spencer (Anthony Geary) had hired him to work in his blues club, not knowing he was Sonny’s father. Curtis’ research turned up that Marshall, under the name “Marshall Parker” played jazz clarinet in a bar in Bensonhurst owned by Mike; he gives his aunt a call.

He tells her that they found out Marshall played in Bensonhurst and asks Stella Henry (Vernee Watson) if Mike had ever mentioned a Marshall Parker when she was treating him. Alzheimers’ patients frequently take trips into their pasts in their minds, so he figures it’s worth a try to see if Mike said anything about him.

Portia finds that information interesting and asks her ex Marcus Taggert (Réal Andrews) if he’s heard the name since he grew up there also but he hadn’t. Marcus didn’t know anything about Mike until he moved to Port Charles and got hired at Luke’s Blues Club, so he’s not a lot of help. Then Sonny shows up at the room to see Curtis after Stella called him to see if Mike had talked to him about “Marshall Parker” that he recalled. Sonny does know the name although he hadn’t met him, he heard about him – from his dad, and piecing everything together that is how Marshall knew about Sonny. Marshall actually had played the ponies with Mike back in the day, and the club hadn’t lasted long but Mike had fond memories of his friend.