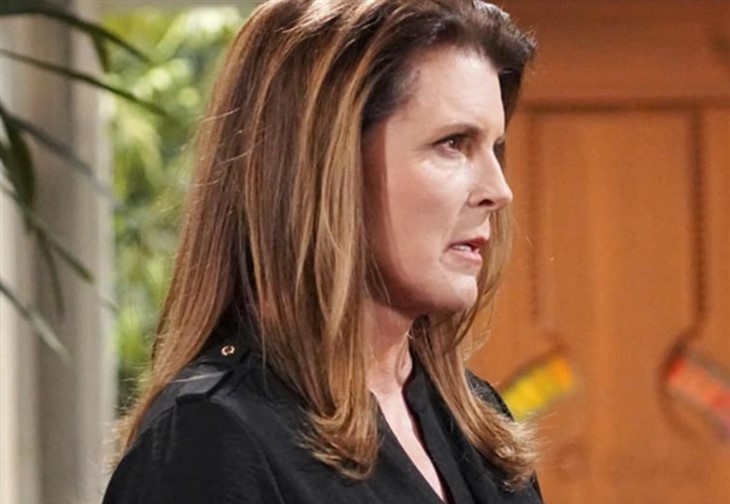 The Bold and the Beautiful spoilers and updates tease that fans are wondering if Sheila Carter (Kimberlin Brown)will finally be backed into a corner and finally be exposed for who she truly is? It seems like the end is almost in sight for the character.

Sheila can manipulate people and come up with schemes but it’s like the end is almost near for her. Fans may recall that she wanted to be a part of her son and grandson’s life. She came up with schemes in a desperate attempt to achieve her goal.

But when she didn’t get it, she turned the lives of those around her upside down. She plotted to kill her daughter in law, Steffy Forrester (Jacqueline MacInnes Wood). But in the end, she shot her son, John “Finn” Finnegan (Tanner Novlan), instead. Will she finally pay for everything that she’s done?

Bill Spencer (Don Diamont) will continue to slam Ridge Forrester (Thorsten Kaye) for choosing Taylor Hayes (Krista Allen) instead of standing by his wife, Brooke Forrester (Katherine Kelly Lang). Bill thinks that Brooke was bound to get hurt after she decided to be with Ridge.

Hope Spencer (Annika Noelle) is set to return home and she may have something to say about their current situation. But before that, Bill will continue to pick on Ridge because of his disloyalty.

As for Brooke, she’ll appeal to Ridge for another chance. She will try to make him realize that they were meant for each other. She also believes that they can stand together even without Sheila in the picture.
Ridge will hear her plea, but he won’t be in a rush to forgive her or return home. He still needs to get over Brook’s betrayal and understand her decision to defend Deacon Sharpe (Sean Kanan).

The Bold And The Beautiful Spoilers – Brooke Logan Or Taylor Hayes

As for Ridge, he’ll realize that he has an opportunity to start a new beginning with Brooke. However, he also feels strongly for Taylor. With all these confusing emotions, Ridge will have to do some soul searching to come up with the best decision.

Brooke is worried that Taylor and Ridge are getting way too close, so she’ll do all she can to convince him to return home.