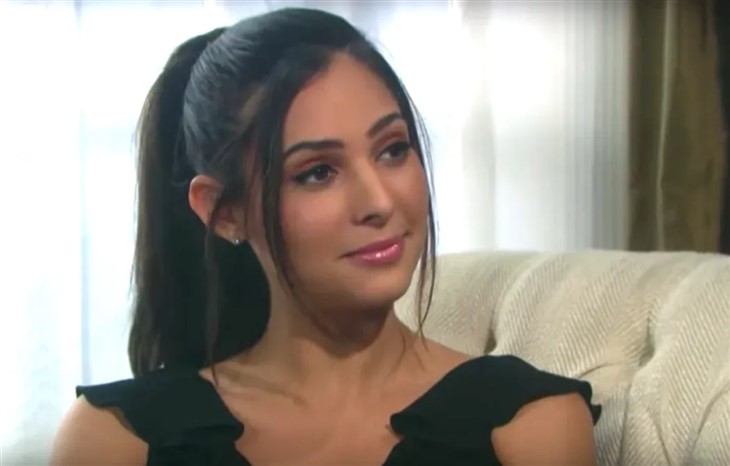 Days of Our Lives spoilers reveal that Gabi Hernandez (Camila Banus) and Li Shin (Remington Hoffman) are developing a romance. However, after passion explodes, Li and Gabi will discuss their future. Could Li suggest Gabi give up life in Salem and move to Paris? It will certainly be a big decision, especially considering Gabi still isn’t over Jake DiMera (Brandon Barash).

DOOL spoilers reveal that Gabi offered Jake a job at DiMera Enterprises. Even though Jake wasn’t sure about taking it, he explained to Ava Vitali (Tamara Braun) that it was his birthright. Then, Jake had more uncertainty after dealing with Kate Roberts (Lauren Koslow), who handled his human resources paperwork.

However, when Gabi started wondering if she should give up fighting for the CEO position, Jake encouraged her. Jake pumped Gabi up and reminded her that she’s a fighter. This is important to remember because it could affect Gabi’s decision about her future later on.

Gabi was arranging a special night with champagne and flowers. Gabi wanted the full package for that evening. Jake assumed that Gabi was setting it up for him. However, Jake was surprised when it was actually for Li.

It seems that Gabi and Li might have already enjoyed a little romance. They certainly seemed much chummier than usual in the episode that aired on Friday, May 20. In fact, Li’s comments about seeing Gabi might suggest they’ve already been romantic.

Days of Our Lives spoilers reveal that during the week of May 23, Gabi and Li will talk about their future. Of course, this could be about DiMera Enterprises. Gabi lost the vote during the DiMera shareholder’s meeting. At least, until Kristen DiMera (Stacy Haiduk) surprised everyone by dialing into the meeting.

However, if things don’t go Gabi’s way or there seems to be too much drama, Li might make her an offer. Li spends most of his time in the Paris office. So, could Li suggest that Gabi take a job at the Paris office and move in with him?

It might be an exciting proposition and Gabi could consider it. However, there will be one thing standing in her way. That is her former flame, Jake. Even though Jake is getting closer to Ava, it’s clear he’s trying to make Gabi jealous. If Jake was really over Gabi, he wouldn’t bother. Plus, he really encouraged her to fight for the CEO position before the shareholder’s meeting.

Gabi will also need to consider who she really wants to spend her life with, as well as which man will put up with her schemes. Jake has mostly been on board with Gabi’s extreme shenanigans. However, Li might not be so tolerant of that kind of behavior.

Of course, Gabi might find it too painful to hang around Salem and watch Jake shack up with Ava. Perhaps when Gabi decides to move to Paris, Jake will realize he doesn’t want to lose her. Will Jake be able to make things right before he loses Gabi forever?