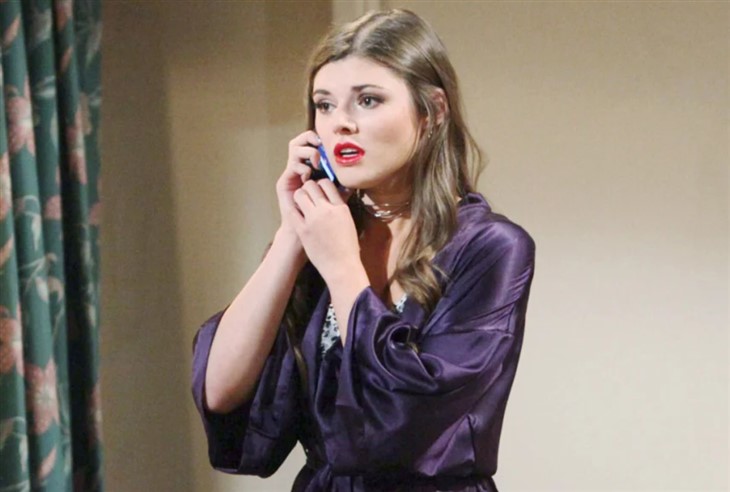 The Young and the Restless (Y&R) spoilers reveal that there is one exit during the week of May 23. The comings and goings confirm that Tessa Porter’s (Cait Fairbanks) sister, Crystal Porter (Morgan Obenreder) has wrapped up her run. Keep reading to find out all the details as well as what’s coming next for the residents of Genoa City.

The Young And The Restless  – Rey Rosales’ Cases

Y&R spoilers reveal that Genoa City was heartbroken when Rey Rosales (Jordi Vilasuso) died. However, there was a silver lining, which was discovering Rey had been working on some cases. One was Crystal’s case, as Rey’s loved ones recently found out. It is the whole reason why Crystal was even able to attend Tessa and Mariah Copeland’s (Camryn Grimes) wedding.

Tessa was excited when she learned about her sister coming to the wedding. Tessa and Crystal had a lot to catch up on. They both discussed how Rey worked so hard to make it possible. It also makes one wonder what other cases Rey had combed through.

Crystal helped Tessa get ready for her wedding. In fact, there was a point where Tessa started to worry that her dress wouldn’t arrive in time. Tessa shared her concerns with Crystal. However, Chloe Mitchell (Elizabeth Hendrickson) showed up just in time.

The Young And The Restless  – ‘Teriah’ Wedding Excitement

The Young and the Restless spoilers reveal that everyone had a great time at Tessa and Mariah’s memorable wedding. Crystal was one person who enjoyed herself and she even shared a few dances with Noah Newman (Rory Gibson).

A few fans speculated that Noah might have a love triangle with Crystal and Allie Nguyen (Kelsey Wang). However, Crystal’s story has ended for right now. Plus, Noah seemed way too focused on Allie. However, with Crystal’s legal problems seemingly resolved, that opens up the door to another return. So, we will have to see what the writers decide to do.

Besides Y&R, Obenreder has appeared in Killer in Suburbia, Nanny Killer, Destruction Los Angeles, Double Mommy, and Mr. Student Body President. The actress has also been in NCIS, My Haunted House, Bones, as well as many others.

The Young and the Restless Spoilers: Here’s What You Can Expect To See From Mariah And Tessa’s Wedding #yr #youngandrestlesshttps://t.co/8qhQ2QX0W7

What did you think of seeing Crystal return for Tessa and Mariah’s wedding? Do you think she should stick around? What kind of storyline would you like to see Crystal in if she should come back on a more permanent basis? Share your thoughts about Morgan Obenreder’s character and remember to keep watching the CBS soap to see what happens next.