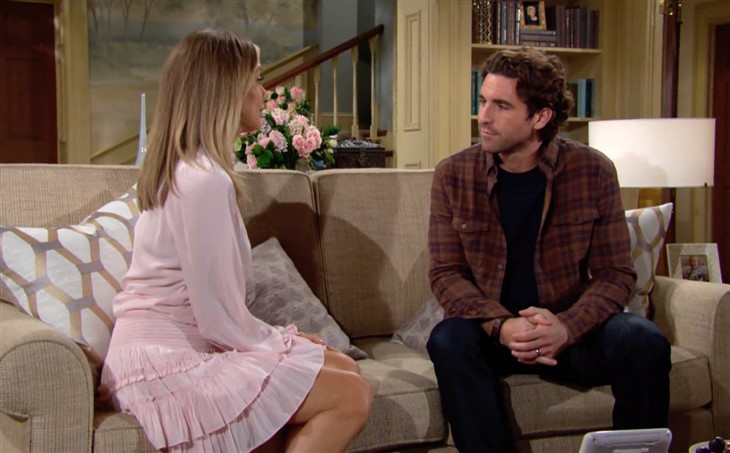 Before his partner Rey Rosales (Jordi Vilasuso) died, Chance had talked to him and confided that he felt like an outsider when it came to his wife’s close friendship with Devon. The two of them have appeared to share more of a parental bond over baby Dominic Chancellor (River and Rainn Ware) than he and Abby do. Viewers will recall that Chance was not able to father Dominic biologically because of effects on sperm motility from when he had taken a bullet for Adam Newman (Mark Grossman).

This has made Chance feel out of the loop over the baby and also out of the equation with Devon acting more like the baby’s father than the sperm donor. But then Chance had been on that mission and missing in action for pretty much the whole pregnancy, in which Mariah Copeland (Camryn Grimes) had been the surrogate.

For Abby and Devon, their bond, which has become much closer, is more like family than a romantic bond, and it does have a lot to do with baby Dominic. Since Chance was gone for so long, Devon stepped up to be an active father to the child but that came with a parental bond as part of the territory. They definitely put the baby first and have grown closer – in a family way – through their rough patch over the custody agreement. For Chance, however, it makes him feel like an outsider in his child’s life and his marriage as well. It is very difficult for him to not feel somewhat threatened by this bond his wife shares with another man!

Abby is taking Dominic for a stroll in Chancellor park and runs into Devon unexpectedly, and it is very natural for them to sit down and coo over the baby together. Their friendship is becoming much deeper and more intimate, and even though they don’t think of it that way, it could be perceived by someone else as romantic. For a stranger to assume Abby and Devon are “together” is one thing, but Chance happens to approach unnoticed and he’s uncomfortable about what he sees!

It all goes back to Chance feeling like an outsider as he had confided to Rey, and he keeps it to himself. Chance doesn’t tell Abby about his feeling excluded and that will prove to be a big mistake!

Abby doesn’t like Chance keeping secrets from her and especially those where there is a major misunderstanding over something! She didn’t like Chance leaving her out of the loop when he was having problems with post-traumatic stress disorder after she found him in Spain and brought him back. They were able to work through it, with Chance getting therapy and now he is recovered or he would have beat himself up over not being able to save Rey. But truth be told, his finding out Rey had a heart attack probably helped him to not blame himself even though he got to the accident after Rey had already perished. Abby will eventually sense something is going on and Chance would be wise to tell her how he feels – but for now, it doesn’t seem that is going to happen!