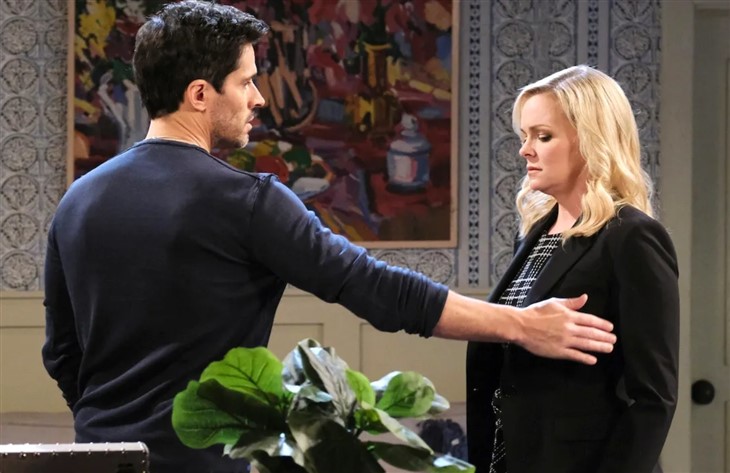 Days of Our Lives spoilers reveal that Jan Spears (Heather Lindell) isn’t the only obstacle in Shawn Brady’s (Brandon Beemer) marriage. EJ DiMera (Dan Feuerriegel) will be another threat to Shawn reconciling with Belle Brady (Martha Madison). After Shawn finds out about EJ and Belle’s kiss, he will fly into a rage. Shawn could go to extremes to get rid of his competition.

DOOL spoilers reveal that Jan’s pregnancy has caused major problems with “Shelle.” Once Shawn was confirmed to be the baby’s father, Belle felt betrayed. Of course, Shawn didn’t know he was sleeping with Jan due to the devil’s trickery. Belle’s issue is that Shawn didn’t tell her the truth.

Then, Shawn made an even bigger mistake by getting Jan out of prison. Jan is still technically an inmate but is on house arrest. Shawn moved Jan into his home and didn’t even give Belle a warning.

Shawn will continue to make bad decisions regarding Jan. The sociopath is using the pregnancy to get exactly what she wants. After Jan intentionally got under Belle’s skin, the two women got into a fight. Shawn walked in just as Belle was unleashing her rage on the pregnant villain. Shawn demanded to know what was going on. Jan will twist this interruption to her advantage.

Jan will have a medical crisis and Shawn rushes her to the hospital. Jan will claim that Belle caused problems with pregnancy, which was already high-risk. Jan might even convince Shawn that Belle intended on causing a miscarriage. If Shawn believes Jan’s story, it could send Belle running in the other direction.

Days of Our Lives spoilers reveal that the weekly preview shows EJ and Belle in a passionate kiss. When Shawn realizes that EJ and Belle have taken their working relationship to a more intimate level, he will be furious. Shawn reels as he says EJ is making the moves on his wife.

Even though Shawn will be angry, he’s the one who moved Jan into the house without even talking to Belle about it. Belle might remind Shawn that he’s living with Jan and has no say on who she kisses.

Shawn might decide to get rid of his competition by making a phone call. Even though Sami DiMera (Alison Sweeney) is in the hospital in Europe, she will be coming back soon. It’s true that Sami is with Lucas Horton (Bryan Dattilo) now, but she will always have feelings for EJ. Plus, Sami still being torn over EJ and Lucas has been confirmed.

So, could Sami return after getting a phone call from Shawn? Sami and Belle have a rocky sibling relationship. So, this will just reignite their feud. Will Shawn’s drastic move help get rid of EJ, or could the plan backfire?