The Bold And The Beautiful Spoilers: Tension Between Steffy And Thomas – Closure Not In Sight Yet 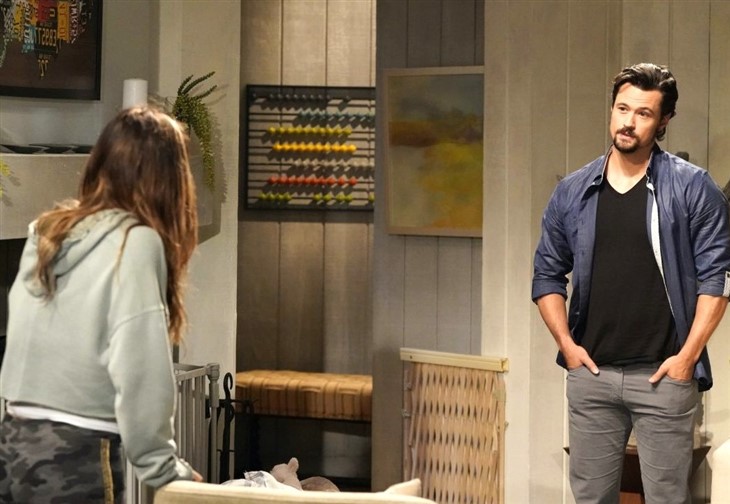 The Bold and the Beautiful spoilers document that Steffy Forrester Finnegan (Jacqueline MacInnes Wood) may never have been in the alley, where her husband was shot dead, if Thomas Forrester (Matthew Atkinson) did not keep Sheila Carter’s (Kimberlin Brown) secret.

But Thomas shielded Sheila from exposure, which allowed her to avoid being confronted in an organized manner. Instead, Steffy overheard Thomas talking on the phone to Sheila, became furious, and bee-lined to Il Giardino. That was ill-advised and proved fatal for John Finn Finnegan (Tanner Novlan) and nearly deadly for Steffy.

Hayes Forrester Finnegan (Samantha Worden and Piper Harriet) has one parent left. His mother will raise him to cherish the memory of his slain father.

Steffy told Sheila that her memory will be erased and that Hayes will never have a relationship with her. But it would seem that Hayes will eventually learn that his paternal grandmother killed his father at some point in B&B’s future.

Thankfully, Hayes is not an orphan because Steffy survived Sheila’s second bullet. Of course, the first shot was intended for Wood’s character, but Finn’s nobility caused him to stand in front of his wife and meet his undeserved daytime fate.

B&B Spoilers – Thomas Forrester Can Not Explain His Mistake Away

Ridge Forrester (Thorsten Kaye) was very upset with his oldest son. Thomas appeared to have dealt with his personality flaw, as lying used to be a part of his daily thought process.

Withholding information is a form of lying. Thomas’ choice not to tell Ridge what Sheila did to Brooke Logan Forrester (Katherine Kelly Lang) was wrong.

As Ridge told Thomas, it was not his choice to make. But Atkinson’s character was conflicted because he believed revealing the champagne label switch intel would hinder his parent’s reconciliation efforts.

While Ridge finally gained the knowledge he needed and then passed it on to Brooke, Steffy will never be able to regain her husband. Unless speculative buzz proves out, which is always possible on the soaps, Finn is not coming back from the dead.

There were many instances in past years where Thomas and Steffy clashed. This serious error in judgment was not something Thomas knowingly did to hurt anyone. However, Steffy, who is no fan of Brooke’s, knew that she needed to learn what Sheila did to her.

It would seem that Steffy will have reason to be cautious around her brother until he apologizes and then attempts to prove himself yet one more time.