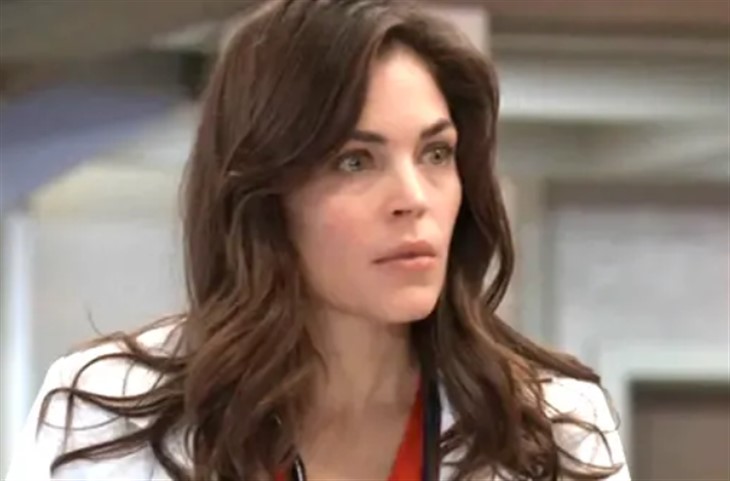 General Hospital spoilers and updates tease that a drunken Britt Westbourne (Kelly Thiebaud) will make a scene in an upcoming GH episode!

Britt, along with several other singles in Port Charles, attends a Society Setups Big Bash at Metro Court Gardens in the summer heat! Drew Cain, (Cameron Mathison) Brad Cooper, (Parry Shen) Brook Lynn Quartermaine (Amanda Setton) and Harrison Chase (Josh Swickard) are all there having fun and the cocktails are flowing! Britt initially didn’t want anything to do with a dating service when her mother, Liesl Obrecht (Kathleen Gati) gifted her with it, but later changed her mind.

She and Brad have scheduled several meetups but each of them struck out with no-shows for the most part. So why not go to this bash even if they do already know most of the others if it’s fun?

Britt obviously wants Brad to get some stress relief; although he seems comfortable with what his mobster aunt Selina Wu (Lydia Look) has had him doing! He thought he was going to be running a poker game and she’s got him “making deliveries” but who knows of what and for what reason? He doesn’t really want to know if these packages have illegal drugs or guns in them and there’s a police investigation-he wouldn’t know if he’s her delivery man or patsy! Britt is really upset that she couldn’t convince her co Chief of Staff Terry Randolph (Cassandra James) to give Brad a job at GH, even if it was cleaning bedpans! Brad would have even accepted a janitorial position but for now he’s okay with working for his aunt!

General Hospital Spoilers – And The Cocktails Just Keep On Flowing!

Britt and Brad just hang out at the party, oblivious to the looks, thoughts or opinions of others who might be watching; they’re among friends for the most part. The cocktails just keep on flowing and Britt just keeps on drinking, and Britt and Brad start acting sillier and sillier, and glad they don’t have to work that night! They decided they need more stress relief than usual after the conversation with Carly Corinthos (Laura Wright) earlier at the yoga class; both are worried about the court case.

Britt understands the pain of her cousin Nina Reeves (Cynthia Watros) who thought a baby she was carrying while in the coma had died, and that she couldn’t conceive. Britt remembers when Nina first came to town and Britt was her obstetrician and she gave her the bad news, now feeling sympathy pain even more.

By the time Britt gets done talking about Nina’s pain and never being able to have a child herself because of Huntington’s, she’s drunk as a skunk! Britt starts making a scene because she’s crying so loudly and others who are there, Maxie Jones (Kirsten Storms) in particular wonders if she should call Liesl to get her! Britt’s own expiring baby clock is ticking loudly and all the talk and worry over Nina and Wiley Corinthos (Viron Weaver) has obviously settled in! Soon, things will take a drastic turn at the event and things will get even worse – Britt will be upset and call for an arrest!