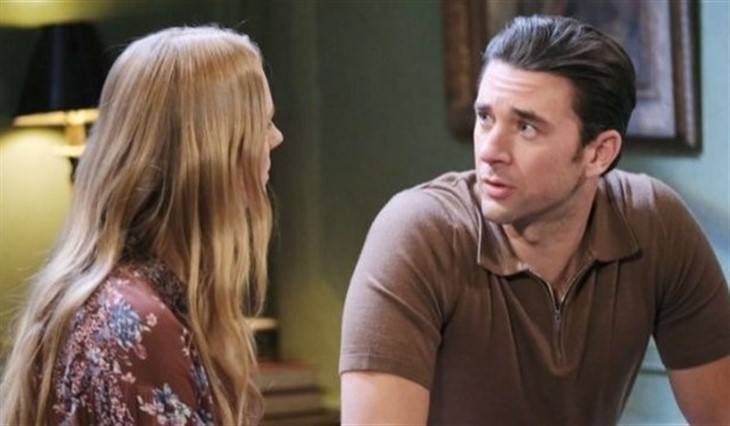 Days of Our Lives spoilers and updates tease that Abigail DiMera (Marci Miller) longs for another baby. She’ll talk to her husband Chad DiMera (Billy Flynn) about expanding their family in an upcoming episode of Days of Our Lives!

Abigail loves having a baby or toddler around, and their youngest, Charlotte DiMera (Olivia and Oakley Rondou) is old enough for kindergarten now. Her brother Thomas DiMera (Cary Christopher) is already in school and Abigail won’t have a baby around, and talks to Chad about expanding their family. Most women get empty nest syndrome when their children graduate from high school and go to college – Abigail, when they graduate diapers and go to kindergarten!

This will be a big decision for the couple, since Chad didn’t get the CEO position he wanted at DiMera, even though he still has a job. He just is wondering how long it will take for Gabi Hernandez (Camila Banus) to decide to boot him out of the company entirely!

Abigail doesn’t know that she and Chad are on Leo Stark’s (Greg Rikaart) hit list; he already got Sonny Kiriakis (Zach Tinker) with some poisoned cookies! Like mother, like son – Diana Cooper (Judith Chapman) got Marlena Evans (Deidre Hall) a couple of years ago with penicillin laced macarons! Marlena nearly died, and Sonny was very ill; Will Horton (Chandler Massey) urges Sonny to report Leo to the police, but it may be difficult to prove! The cookies were sent from Will’s address although Leo was obviously the one who sent them, and at least Sonny survived – who knows what he’s got in store for Abigail and Chad? He’s already written that slanderous article about Chad and Jackie Cox but if he’s escalated to poisoned cookies, who knows what he has planned?

Days Of Our Lives Spoilers – Okay, Let’s Have Another Baby

Chad finally goes along with Abigail about having another baby, because she is so insistent about it and so ready to redecorate the nursery! She’s all excited about bassinets and onesies and Charlotte and Thomas having a little brother or sister, and Chad knows she won’t give up until she’s pregnant again! Perhaps things will go better this time than they did with the others, Thomas’ paternity having been in question and Charlotte’s as well, thanks to Gabi altering the paternity test!

Chad knows this time there will be no question as to whether the baby is his or not, so he goes along with Abigail and they get busy!! Abigail makes sure that the serum she ingested of Dr. Wilhelm Rolf’s (William Utay) doesn’t have birth defect causing properties even though it’s been out of her system for a while!

Abigail is ready to go, and wants to pick names already and she hasn’t even taken a first pregnancy test yet – but if it’s a girl she definitely wants to name her Laura. She wants to honor her late grandmother Laura Horton (Jaime Lyn Bauer) and Chad agrees. They’ll talk some more about boys’ names once she’s got a positive pregnancy test and decide if they want to know the sex ahead of time. They talk about other hopes and dreams and hope for the best for the future and their future child.