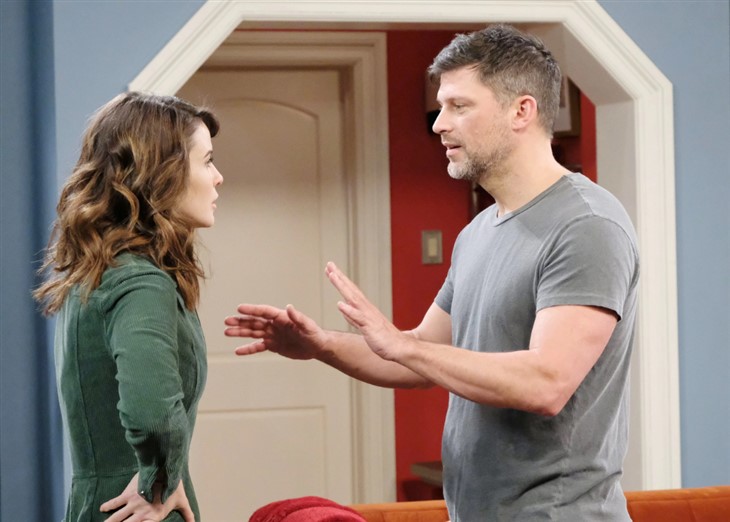 Days of Our Lives (DOOL) spoilers tease that Eric Brady (Greg Vaughn) won’t remain in the priesthood for long once he returns to Salem. More than likely, he will be removed from the priesthood because of his lingering feelings for Nicole Walker (Arianna Zucker). But he can’t seem to fully give himself to Nicole either.

Just months after they finally married, Eric decided to return to his missionary work in Africa Nicole grew frustrated and ended up cheating on Eric with Xander Cook (Paul Tefler). Realizing that no matter how much they loved each other, they just can’t seem to fully commit to one another for any length of time!

Days Of Our Lives Spoilers – Dr. Sarah Horton Is leaning On Eric Brady More Than Ever!

With Eric back in Salem and probably out of the priesthood, he would most likely try to reconcile with Nicole. But Nicole and Rafe Hernandez (Galen Gering) fell in love while Eric was away and to Eric, they seem to be good for each other. Luckily for Eric, another of his former flames is having a difficult time and is leaning on him. Dr. Sarah Horton (Linsey Godfrey) has had to go through learning that her baby with Eric died in childbirth. Eric and Sarah were both led to believe that Kristen DiMera’s (Stacey Haiduk) baby was theirs because Xander and Victor Kiriakis (John Aniston) switched the babies.

Kristen eventually learned the truth, but Sarah couldn’t accept that her baby died so she kidnapped her, eventually ending up in Paris. Kristen found Sarah and Sarah realized that she had to give Kristen her baby. She then mourned the death of her own baby. She eventually worked through it, but now she has to go through it again.

Kristen drugged Sarah last year with one of Dr. Wilhelm Rolf’s (William Utay) most dangerous concoctions. The drug made Sarah think she was a child at first, and later she believed she was Renee DuMonde (the late Phelece Sampler) after reading Renee’s diary. She was later given what everyone thought was the antidote but in reality, it was a second dose of the mind-bending drug, and Sarah was left believing she was a toddler.

Once it was discovered that the antidote had never been given to Sarah, it was once again given to her. This time she was herself again finally. Except that she had no memory of learning that her baby had died. Eric broke the news to a horrified Sarah, who is now once again mourning her baby as if it just happened.

Sarah eventually forgave Xander for the baby switch, and they planned to be married before Kristen took her. She may not be so quick to forgive a second time because she is different after everything she has gone through. She might decide that she wants to be with Eric once again, and since Nicole is with Rafe now, Eric might want the same thing!

Will Sarah forgive Xander for the baby switch a second time? Is she in love with Eric once again? Will Eric decide that he wants Sarah since Nicole is taken? Anything can happen in Salem so stay tuned to Days of Our Lives airing weekdays on NBC. And don’t forget to check back right here regularly for all your Days of Our Lives news, information, and spoilers!