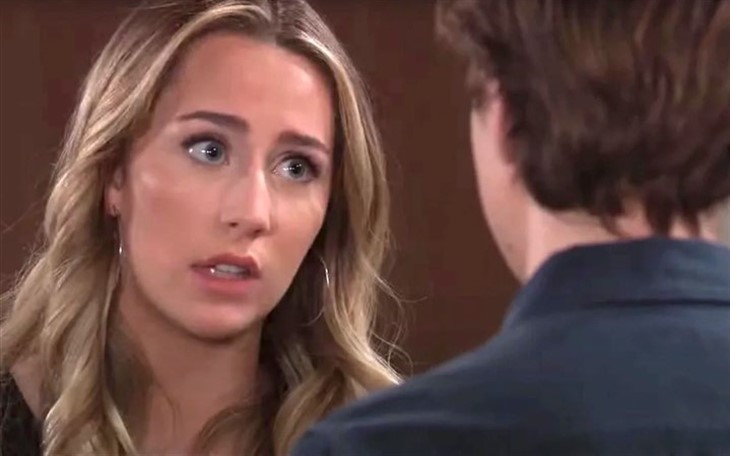 General Hospital spoilers tease that Josslyn Jacks (Eden McCoy) and Cameron Webber (William Lipton) have had so much to deal with in their young lives and the hits keep on coming. Most recently, their first sexual experience was recorded and posted on the internet by Esme Prince (Avery Kristen Pohl). Although this was difficult for both of them, it was especially hard on Joss who had to face the brunt of the nasty comments and innuendo. But now Cameron is facing his own issue and it will be Josslyn’s turn to be there for Cameron.

Cameron’s mother Elizabeth Webber (Rebecca Herbst) has been basically in a trance while under the influence of sleep medication. She’s done some things, like setting fire to her late husband Franco Baldwin’s (Roger Howarth) art studio and knocking Harrison Chase (Josh Swickard) out, giving him a concussion; that are violent in nature. But she doesn’t remember any of these things when she wakes up.

Cameron walked in when Elizabeth was in a trance. She was cutting up a drawing done by Violet Barnes (Jophielle Love). There was a scary moment when Cameron tried to wake his mother up when she still had scissors in her hands. Thankfully, Hamilton Finn (Michael Easton) arrived and was able to get through to Elizabeth. But this was a scary moment for everyone involved. Cameron is still very young, just now in his freshman year at Port Charles University.

Cameron has been Josslyn’s rock during the explicit video scandal. They stood together and gave an interview for the Invader about the experience. But there’s no denying that Josslyn has faced the brunt of the backlash. She was even accused of posting the video herself. But now, as Cameron is dealing with his mother’s issues, he is rightly scared about what happens to her now. Look for him to reach out to Josslyn for support. And as always, this young couple will face all their issues together.

How will Cameron react to his mother’s newly discovered condition? Will his relationship with Elizabeth become strained? Can Josslyn provide the support that Cameron needs right now? Anything can happen in Port Charles so stay tuned to General Hospital airing weekdays on ABC. And don’t forget to check back right here regularly for all your General Hospital news, information, and spoilers!