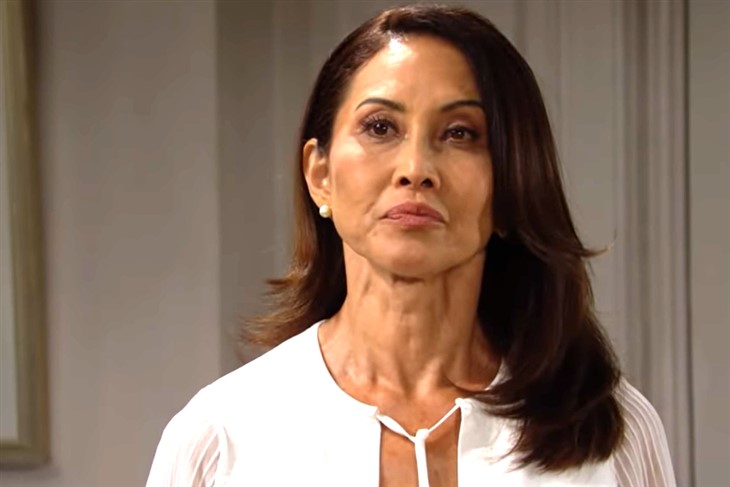 The Bold and the Beautiful spoilers document that Li Finnegan (Naomi Matsuda) remains in a state of shock. Her way of dealing with Sheila Carter’s (Kimberlin Brown) monstrous shooting was to smuggle John Finn Finnegan (Tanner Novlan) out of the hospital.

Fans rejoiced when a slow-motion shot revealed Finn was not dead. Instead, the audience learned that Li has been miraculously caring for her adopted son in what appears to be a rented location.

Li’s tell to Novlan’s unconscious character included that she was on-call at a hospital in Los Angeles, California, where the ambulance took Finn. As the attending doctor, Li was told that Finn had a faint heartbeat and no brain activity.

THE Bold And The Beautiful Spoilers – Soapy Circumstance Provides Explanation

Matsuda’s dialogue helped explain how Finn was still alive, an apparent few weeks since the shooting. He was last seen being carted out of the alley behind Il Giardino with a sheet pulled over his face by an Emergency Medical Technician.

The odds are not astronomical that Li would have been Finn’s attending physician on that fateful night, but they sure are long. Nevertheless, this plausibly addresses how Finn could have been ushered out of the hospital and kept alive since Li signed legal documents that declared him dead.

Viewers could assume that Li’s medical license will be revoked after this situation is resolved. She was a doctor in good standing until that point.

However, Sheila has a way of driving sane people over the edge. Li was destroyed after learning that her husband, Jack Finnegan (Ted King), had an affair with Sheila that led to Finn’s birth.

Then, before knowing that Sheila was also responsible for Finn’s shooting, Li felt compelled to give her son an indefinite chance to revive. His comatose state and apparent lack of brain function would generally mean death arrives at some point.

The Bold And The Beautiful Spoilers – Second Epic Reveal Arrives

It can not be possible that TPTB created this story line twist and then Finn passes away without awakening. Yes, he still could perish. But even that outcome seems unlikely.

The second epic reveal, following the astonishing sight of seeing Finn alive, must be his return to the living. Just as the fans rejoiced at seeing him in that bed, Steffy Forrester Finnegan’s (Jacqueline MacInnes Wood) will be amazed when she sees her husband and Hayes Forrester Finnegan’s (Samantha Worden and Piper Harriet) father alive again.

How Sheila eventually reacts is another story that will be told on B&B.