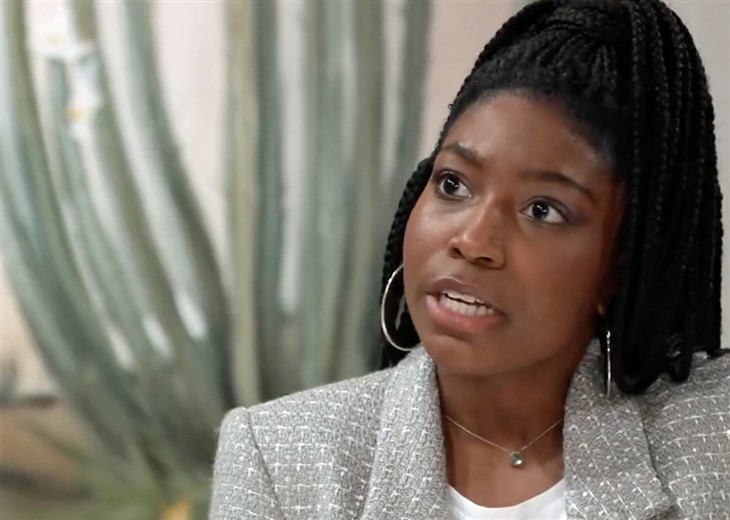 General Hospital (GH) spoilers and updates tease Trina Robinson (Tabyana Ali) has been attempting to take back her life. Trina has been framed by Esme Prince (Avery Kristen Pohl) for a crime that she did not commit. Esme filmed Josslyn Jacks (Eden McCoy) and Cameron Webber (William Lipton) having sex for the first time and broadcasting the footage online. Trina has been getting support from the ones that she loves. Trina has been able to make a new friend with Rory Carbera (Michael Kruse). Rory has been helping to keep Trina safe from harm.

Trina has been grateful that Rory has wanted to help her. Trina has been trying to make a decision about Spencer Cassadine (Nicholas Chavez). Trina believes that Spencer decided to stand by Esme. Trina believes that she needs to keep her distance from Spencer. Trina has been spending time with Rory. Trina and Rory have had an encounter with Spencer at Ava Jerome-Cassadine’s (Maura West) art gallery. Spencer was not happy that Rory was with Trina. Trina has informed Spencer that she does not want to be around him. Trina and Rory may encounter Spencer again. Trina and Rory may have some kind of trouble when they meet up with Spencer.

General Hospital Trina is hoping that she will be able to clear her name. Trina had hoped to get closer to Spencer but she has started to believe that she and Spencer will remain friends. Trina does not know that Spencer is trying to prove her innocence. Will Trina find out that Spencer is trying to get the proof he needs to help her? Trina may not find out that Spencer wants to help her. Trina knows that Portia and Taggert want her to be happy and be in a good relationship. Trina has found that she has been able to turn to Rory. Will Portia and Taggert want to bring Trina and Rory together as a couple? Trina may decide that she will pursue a relationship with Rory. Will Trina and Rory decide that they want to get into a romantic relationship? Be sure to catch up on everything happening with GH right now. Come back here often for General Hospital spoilers, news, and updates.