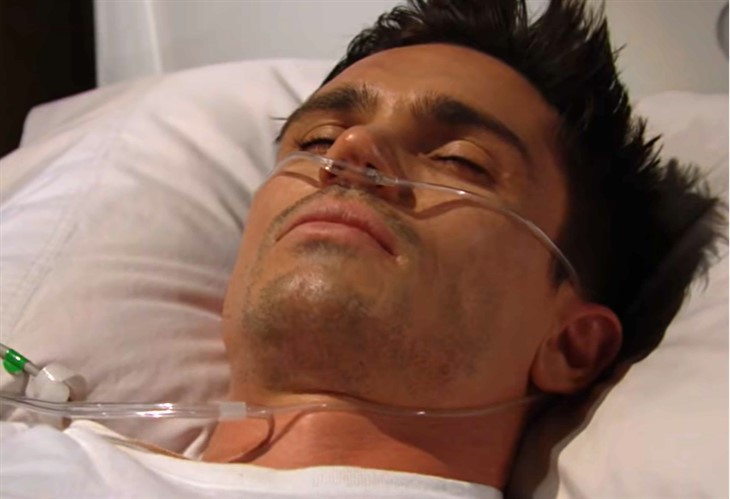 The Bold and the Beautiful spoilers document that John Finn Finnegan (Tanner Novlan) has been revealed as alive. On the other side of the screen, Finn would likely never regain consciousness. But his awakening appears inevitable in the land of daytime.

Li Finnegan’s (Naomi Matsuda) remarkable story is playing out, with viewers learning that Finn’s adopted mother refused to admit her son’s life was likely over. So, as the attending physician, she signed his death certificate, secretly transported him to where she is living in Los Angeles, California, and is keeping him alive through use of stolen medical devices.

Steffy Forrester Finnegan’s (Jacqueline MacInnes Wood) talk with Li at the cliff house was unnerving. Li only stayed for a few minutes and did not want to talk about a memorial service for Finn.

Liam Spencer (Scott Clifton) supported Steffy’s belief that Li was acting strangely. They both chalked up Li’s behavior to the effects of extreme grief.

Li allowed Steffy to believe that she had Finn cremated, based on Steffy’s reference to the topic and the fact that Li did not refute the assumption.

Steffy is nearing the end of respectful patience. She lost Finn too, not just Li.

If Li does not provide information about Finn’s final resting place the next time Steffy asks, viewers should expect Wood’s character to take action.

But would TPTB have Steffy trail Li to the location where Finn is being cared for? Liam is over at the cliff house very often, in Brooke Logan Forrester’s (Katherine Kelly Lang) opinion. So, maybe he takes the initiative or stumbles upon the truth?

Li is isolated after splitting from Jack Finnegan (Ted King). If Sheila Carter (Kimberlin Back) was not revealed as Finn’s birth mother, Li and Jack would still be together. Of course, Finn likely would not have been inadvertently shot dead by Sheila if she was not his birth mother.

Soapy reality allowed Li to get a hospital bed, all needed equipment, and medicine into her living space. She somehow did that in an undetermined amount of time that could not have been more than a handful of days.

But Li’s secret life-sustaining efforts can not endure indefinitely. Someone will uncover the truth, potentially before Finn awakens.