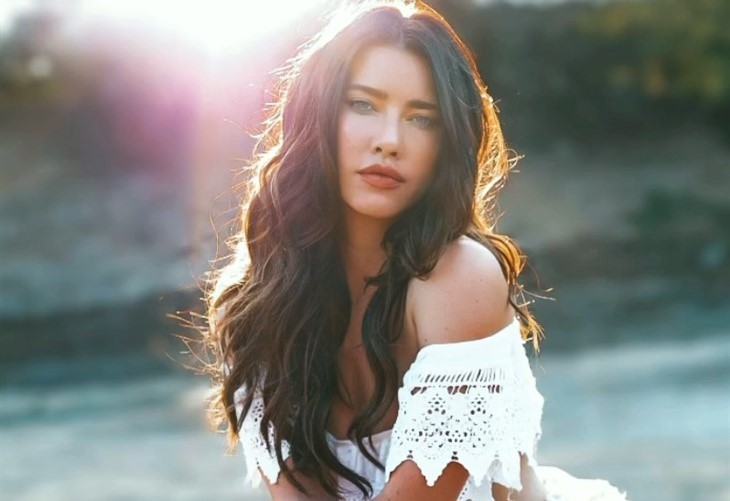 The Bold and the Beautiful spoilers document that Jacqueline MacInnes Wood (Steffy Forrester Finnegan) recently confirmed that she gave birth to her third child. She and her husband welcomed Brando Elion Ruspoli into the world during the last full week in May. Readers of this comprehensive soap site know that B&B records its episodes approximately one month in advance, which means that Steffy will soon be leaving Los Angeles, California.

Teasers indicate that Steffy will opt to fly to Europe with her children, Kelly Spencer (Sophia Paras McKinlay) and Hayes Forrester Finnegan (Samantha Worden and Piper Harriet) shortly. Wood’s character is reeling after the shocking loss of her husband, with viewers and Li Finnegan (Naomi Matsuda) knowing that John Finn Finnegan (Tanner Novlan) was not killed.

All was not wonderful before Sheila Carter (Kimberlin Brown) reappeared in Los Angeles, California. But the instant hardcore fans saw that shadowy figure behind Finn in the Forrester mansion guest house they guessed what was ahead.

Sheila somehow made her way into a locked building and had Finn come to her on his wedding day to Steffy. That soapy setup led to Finn believing that he was introducing Sheila to Steffy and her family as his birth mother.

Little did Finn know that those who were gathered at the wedding reception were familiar with Sheila, who was already B&B’s most infamous villain. And that was before she came to shoot Finn and Steffy in the alley behind Il Giardino.

Yes, Finn is alive. Li just so happened to be on call at the hospital where her son was taken by the paramedics. She handled his case, signed the death certificate, and then transported him to wherever she is living.

The odds of Li even being present when Finn was taken to a hospital that was different than the one where Steffy arrived were low. Yet, it happened. But the chances that Li could, in effect, create a fake death scenario and then be keeping him alive, with all needed medical equipment available to her, is pure soap.

The Bold And The Beautiful Spoilers – Steffy Forrester Finnegan Learns Now Or Later?

Assuming that Wood takes a few-month maternity leave and then returns to the set. It is reasonable to believe that she took her leave earlier this month and could be back by mid-summer.

Wood may have recorded advanced scenes that would have allowed for her and Novlan to have created a reunion reveal. But would teasers indicate that Steffy is going to Europe with the children if she knows Finn is alive and would leave him in LA? That seems impossible.

So, it is fair to speculate that Steffy will not realize Finn is alive until a handful of months pass. Viewers may not see the anticipated reveal, where Li’s actions are exposed, until later this summer.