The Bold And The Beautiful Spoilers: Taylor Looks Past Brooke’s Marriage – Ridge Unable To Choose 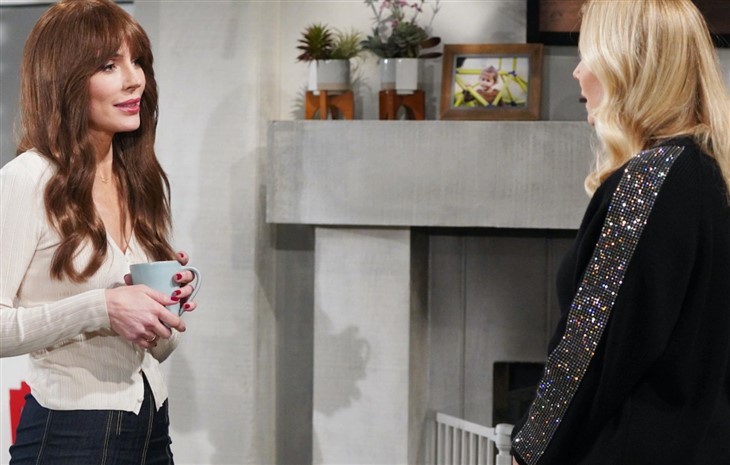 Both ladies apparently have keys to Eric and Quinn Fuller’s (Rena Sofer) residence. Why Quinn allows that remains a good question, as does Ridge Forrester’s (Thorsten Kaye) decision between the two women who want his affection.

Ridge has been married to various ladies and was involved with various others. But the volume of marriages to Brooke (eight) outweighs the total of all others combined, with him being married to Taylor twice.

Brooke has been and appears to remain the love of Ridge’s life. He told her that directly in recently months. So, he would seem inclined to keep his marriage to her intact after this period of separation.

Historically, Ridge and Brooke unquestionably represent one of this iconic soap opera’s all-time pairings. But are all points in this section enough to ensure a reconciliation happens? Taylor hopes not.

Taylor bests Brooke in a category that Lang’s character will never top. Allen’s character had three of Ridge’s children.

Hardcore fans recall that the late Caroline Spencer Forrester (Joanna Johnson), the daughter of Bill Spencer Senior (Jim Storm), was the first woman Ridge married. That happened in 1990. Taylor (as then played by Hunter Tylo) became Ridge’s second wife in 1992.

All these years later, and after two divorces, it appeared as though a reunion with Ridge was nearly certain. The secondary Sheila Carter (Kimberlin Brown) reveal, regarding the champagne label switch, shook Ridge’s mind and put Taylor in Limbo.

The Bold And The Beautiful Spoilers – Can Ridge Forrester Avoid Hurting One Lady?

Ridge knows Taylor will be hurt if he reconciles with Brooke. Taylor told him that she would support whatever decision he made, but he knows where her heart lies.

Brooke has not offered unconditional support. She told Ridge that he is her husband and that she wants him back in her home.

The only way that Ridge can avoid hurting one of his loves is if he chooses to remain single, as that decision would hurt two. However, the likelihood of that drama seems low on B&B.