The Young And The Restless Spoilers: Elena Warns Imani About Moving In On Nate 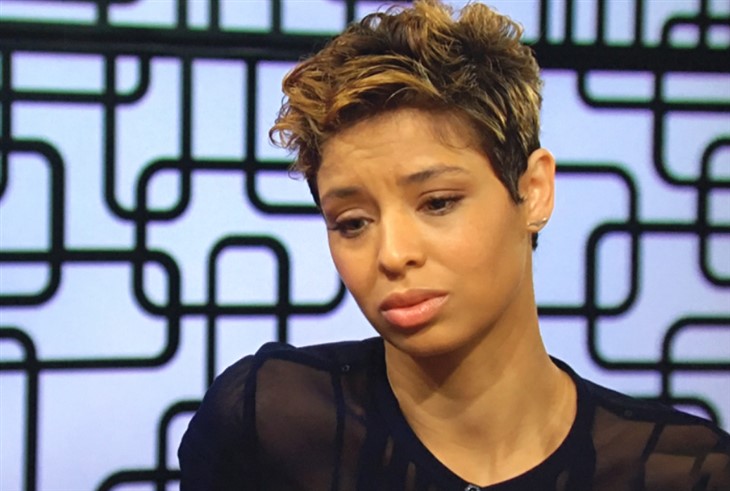 The Young and The Restless spoilers and updates tease that Elena Dawson (Brytni Sarpy) will warn Imani Benedict (Leigh-Ann Rose) about moving in on her man! She’ll tell her to stay away from Nate Hastings (Sean Dominic) in an upcoming Y & R episode!

Nate and Elena both have jobs that demand a lot of their time and attention, and because of that they have trouble scheduling time for each other. It took a long time for the couple to get to the place where they are with each other now, living together in Adam Newman’s (Mark Grossman) old penthouse. It had been perfect, since Chelsea Lawson (Melissa Claire Egan) hadn’t wanted to live there and Adam had gotten it from Nate in the first place.

Nate’s new career is taking up much more of his time than he had previously thought and Elena is surprised by the fact. It’s not that she’s insecure because he’s busy, since she understands “busy” better than anyone.

Elena dozes off and she has a dream that for Elena, is more of a nightmare – she dreams that Imani has caught Nate’s eye in a sexual manner! This is very disturbing to Elena, who knows what Nate and she went through to build their relationship to what it is now! Quite frankly, she doesn’t understand why Imani is coming up in her dreams, after her man, and tries not to be superstitious about it! After all, the spicy dream may only be the result of some spicy food she ate earlier in the day or the result of some other stressful situation! Still, she resolves to make sure that Imani isn’t still flirting heavily with Nate, which Elena had warned her not to do previously!

Elena goes over to Crimson Lights to have some coffee and pastries, and finds Imani seated at a table by herself, and she invites Elena to sit down with her. Elena doesn’t directly confront her about staying in her lane and away from Nate again, but she wants to gauge how dangerous she might be to her and Nate’s relationship.Elena had gotten the impression previously of Imani that she is someone who does not respect boundaries and when she wants a particular man, she doesn’t care if he’s taken!

As expected, Imani wanted her to sit down so she could push Elena’s buttons, and she pushes every button to make Elena thinks she’s got Nate she can! It’s all Elena can do to even be civil to the woman because she’s making herself clear she wants Nate and Elena needs to move out of her way!

Check out my newest #YR post on @SoapOperaSpy… https://t.co/G4jns7ky9w

Once again, Elena is forced to confront Imani and to remind her in no uncertain terms to stay away from her man! She has a difficult time not dissing Imani with questions like “Are you only attracted to unavailable men” but she certainly is tempted! To say things get ugly might be the understatement of the century but it’s Imani dishing out the ugly, and Elena trying hard not to stoop to her level. It won’t be surprising if Imani makes Elena so mad that she tells her she must have a hard time getting a man of her own!