Days Of Our Lives Spoilers: EJ Torn Between Sami And Belle 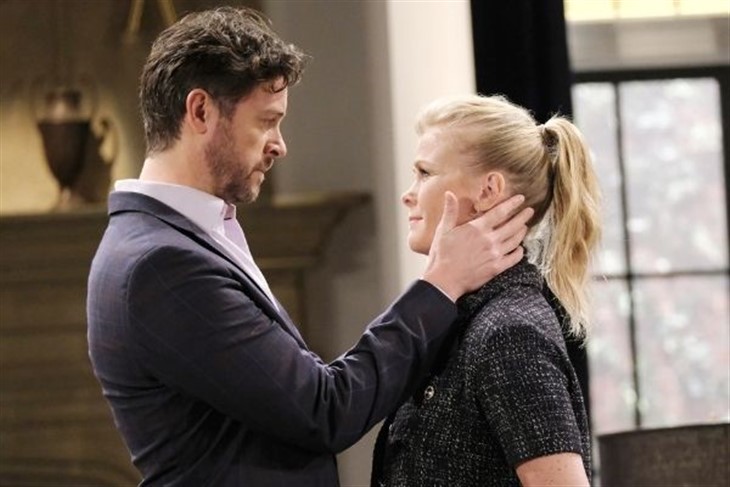 Days of Our Lives spoilers and updates tease that EJ DiMera (Dan Feurreriegel) will be torn between Sami Brady (Alison Sweeney) and Belle Brady (Martha Madison) in future DOOL episodes!

Lucas Horton (Bryan Datillo) has already returned to Salem ahead of Sami, because she is in Europe recovering from a broken leg suffered in a skiing accident. Lucas hasn’t yet made the announcement that the two of them are engaged, he’s waiting for her to come back to Salem. Much like Sami, however, EJ seems to always want who he cannot have and gets into a lot of conflict over them; he and Belle have recently gotten very close!

Days Of Our Lives Spoilers: Ben And Ciara’s Life-Changing Gift From Hope

But when Sami comes back and EJ finds out she’s engaged to Lucas, he’s going to regret divorcing her and he’ll want her back! And he’ll pit two sisters against each other over him trying to win Sami back!

DOOL Spoilers – Sami Brady May Not Want EJ DiMera Back But That May Not Matter To Him!

Sami may not even want EJ back, having turned her feelings for him off, but that may not matter to him; would she want him if she knew the truth? Sami thinks EJ kidnapped her and that Lucas is her hero, when in reality Lucas kidnapped Sami and rescued her to become her hero! In the meantime, he’s been her sister Belle’s best friend and confidant and in the process he and she have become very close. Belle thinks Jan Spears (Heather Lindell) has stolen her husband Shawn Brady’s (Brandon Beemer) heart, when nothing could be further from the truth. Jan wants Belle to think that and she’s milking her pregnancy by Shawn situation for all it’s worth!

EJ will continue to try and clear his reputation, even though he’s clear of criminal charges for Sami’s kidnapping; he’s a free man. But it’s his reputation that is at stake and especially with Johnny DiMera (Carson Boatman) and Allie Horton (Lindsay Arnold); and his and Sami’s youngest, Sydney DiMera (Evelyn Stephenson). EJ doesn’t want them thinking he kidnapped their mother even if Belle did get him cleared of the charges – there are plenty of truly guilty people out on the street.

Lucas could still call foul on EJ’s release although because of double jeopardy laws he can’t be tried for the kidnapping again. But the only way to clear his reputation for sure is to find the real kidnapper-and that was Lucas!

If EJ is able to expose Lucas as the real kidnapper and the true story is proven to Sami, there’s a good chance of the two sisters fighting over EJ! Sami will be royally livid at Lucas for pulling such a shady stunt as kidnapping her so he could be her hero, and she may stop the wedding! By that time, a divorce by Belle of Shawn will be well underway and she and EJ will have become further involved with each other! EJ will be right in the middle and he’ll be torn between Sami and her sister, and that’s a very uncomfortable place to be!