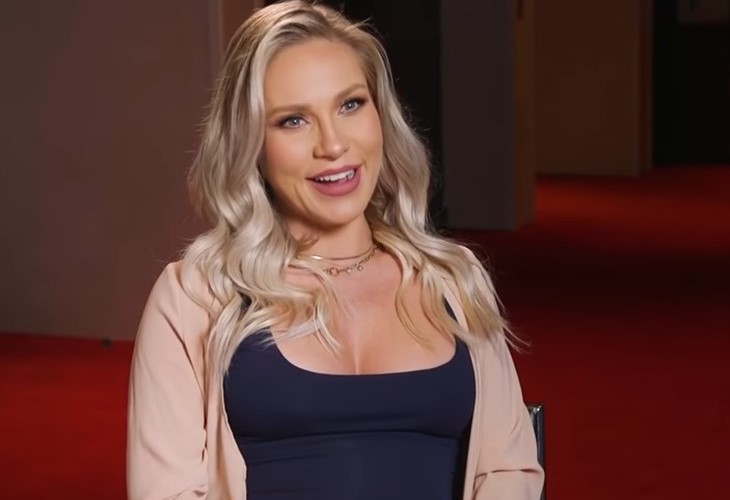 Dancing With The Stars fans heard that Sharna Burgess and Brian Austin Green expect a baby and now she’s 35 weeks along.  The news arrived in February, and since then, she shared her journey with appreciative fans of the show. Her latest photo drew a lot of attention and many people agree that she looks completely “stunning.”

Dancing With The Stars – Sharna Expects Her Baby In July

After the last season of the show, fans looked forward to the Live tour. However, in November, Sharna said that she probably wouldn’t take part in it. At the time, she felt that living on a bus and being on the go might be way too much to take on. In fact, in hindsight, fans now know that she was already preganct back then,

Dancing With The Stars takes a lot out of the pro-dancers, but a lot of them did go on tour. However, none of them were pregnant at the time. They included Artem Chigvintsev, Brandon Armstrong, Alan Bersten, Sasha Farber, Daniella Karagach, Pasha Pashkov, Gleb Savchenko, and more. Mind you, Artem took a break midway through it all.

Dancing With The Stars – Pregnant Sharna Burgess Wows With Photo

On May 30, Sharna took to her Instagram and wrote a long caption. However, the photo caught the eye of many people who agreed that she looked stunning. Unfortunately, she didn’t credit the photographer. Her caption talked about how she can’t wait for the baby to come along. And she really hopes that the kid comes along on his due date. Additionally, she added, “I can’t wait to be your Mother. Forever and always.”

Dancing With The Stars fans couldn’t help but exclaim over the stunning picture. Here’s what they said about it:

With all sincerity, you have never been so beautiful 💞.

You are GORGEOUSLY STUNNING Sharna 😍😍😍😍😍😍.

😍😍😍 Sharna you are an absolute vision.

This photo is breathtaking!!! One to frame for sure!!! Sharna I am so happy for you and Brian and your growing family!! I just love you guys and this new chapter for you!!! You will be the best parents!!! ❤️❤️”

Dancing With The Stars – Other News – Packing Her Bags

The Dancing With The Stars pro-dancer also mentioned on her Instagram Stories that she decided it is time to pack a bag. Of course, it’s a very good idea to do that as the 40th-week approaches. The third trimester can be a difficult time for moms, and they often start to wish that baby would hurry up and make an appearance. It’s not long to go now before Sharna welcomes her little one.

Be sure to catch up on everything happening with Sharna Burgess right now. Come back here often for more Dancing with the Stars spoilers, news, and updates.