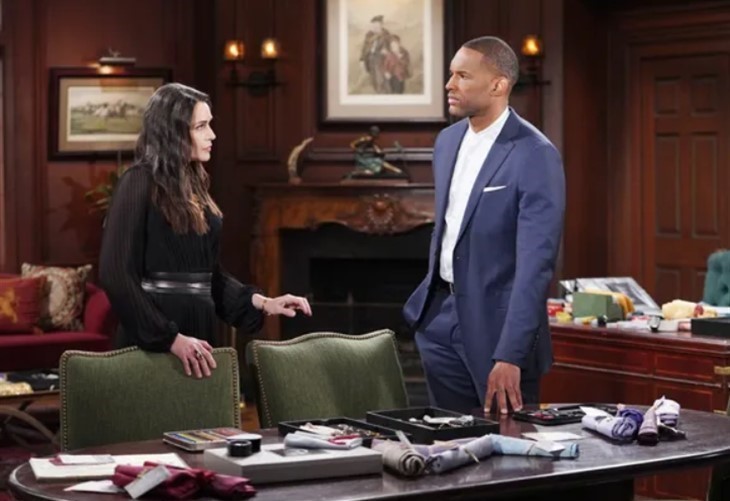 The Bold and the Beautiful spoilers document that Quinn Fuller (Rena Sofer) is pleading with Carter Walton (Lawrence Saint-Victor) not to make the wrong choice. He admitted to Quinn that Paris Buckingham (Diamond White) is not someone he loves.

Carter reaffirmed that Quinn, not Paris, is the woman who touched his soul. Sofer’s character remains committed to Eric Forrester (John McCook).

Carter does not want to hurt the man who has served as his mentor and father figure. But B&B fans know that Eric’s personal life is changing and drama with Paris is about to erupt.

The Bold And The Beautiful Spoilers – Donna Logan Pines For Yesterday

Donna Logan (Jennifer Gareis) is the anti-Quinn. Gareis’ character is sweet, trusting, and does not stir trouble.

Eric has a soft spot in his heart for his one-time wife, who lovingly refers to him as her honey bear. As viewers have seen, Eric is using Donna as an emotional refuge in a delayed response to Quinn’s betrayal.

In this instance, Eric is in the wrong. After telling Quinn that he forgave her and wanted to remain married, he is cavorting with Donna and is telling her that he does not regret it.

Devoted viewers thought that Reese Buckingham (Wayne Brady) was the problem in that family. He remains in jail for the part he played in an underground adoption scheme. But there is a more current issue that will impact Paris in a direct way.

Grace Buckingham (Cassandra Creech) is strongly opposed to Carter’s involvement with her youngest daughter. Creech’s character is teased to follow through on her threat and go to Ridge Forrester (Thorsten Kaye).

Rather than tell Ridge that Carter and Paris are involved, she suggests unlawful workplace activity is happening. Grace’s efforts are what Carter has been fearing.

The Bold And The Beautiful Spoilers – Are Couple’s Switches Realized?

Carter has done nothing against company policy or the law with Paris, who has been pursuing him. However, Carter might feel compelled to back off Grace’s daughter depending upon how Forrester Creations handles her complaint.

Quinn seems sure to learn about Eric’s betrayal as the above plays out, which will further drama on B&B.