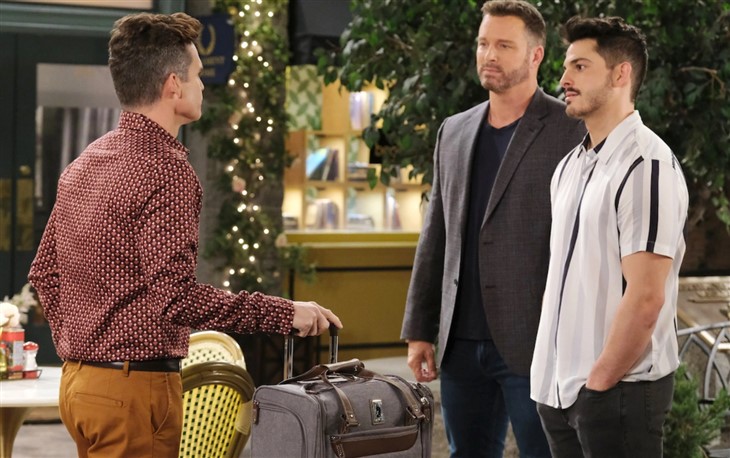 Days of Our Lives spoilers and rumors tease that Salem will strike back at Leo Stark (Greg Rikaart) and when they get done, he may not live to tell the tale! Everyone will be out to get Leo in future DOOL episodes!

Days Of Our Lives Spoilers – Public Enemy Number One

Leo makes himself Public Enemy Number One as practically all of Salem wants revenge on him for his revenge, and some are willing to go outside the law! The drugging and rape of Sonny Kiriakis (Zach Tinker) was just the start, even though Will Horton (Chandler Massey) urged him to seek justice lawfully. Leo apparently forgot Sonny’s great uncle Victor Kiriakis (John Aniston) was once involved with both the Greek and the Italian Mafia, and mobsters don’t take kindly to their family being harmed!

Days Of Our Lives Spoilers: EJ Torn Between Sami And Belle

Victor hasn’t stretched his mob muscles in many years, but that doesn’t mean he doesn’t still have contacts. Leo might find himself wearing a very stiff cement overcoat before it’s over with!

DOOL Spoilers – Clyde Weston Didn’t Like His Lady Being Harassed

Leo’s also caught the attention of trying-to-reform-himself Clyde Weston (James Read) and not in a real good way; Clyde didn’t like it when pipsqueak Leo harassed his new lady! Nancy Wesley (Patrika Darbo) was publicly embarrassed when Leo grabbed her wig right in the middle of Horton Square; Rafe Hernandez (Galen Gering) shouldn’t have just given him a warning!  Leo was also heard making some serious death threats towards Nancy and her daughter Chloe Lane (Nadia Bjorlin) and her beau Brady Black (Eric Martsolf). Brady’s Victor’s grandson so he’s in double trouble with the former mobster and EJ DiMera (Dan Feurreriegel) can tell Leo some tales about Clyde! Oh, and that’s not all, speaking of the DiMera family – he’ll be in the scopes of a couple of DiMeras!

Every DiMera son has Stefano DiMera’s (Joseph Mascolo) genes, and that includes Chad DiMera (Billy Flynn) even though he never physically met his father! Viewers will recall that Chad channeled Stefano before his “essence” was removed from Steve Johnson (Stephen Nichols) and so expertly, even his own wife was afraid of him! Stefano had been giving Chad orders from the great beyond, and Chad had no choice but to obey, after being triggered by the term “la famiglia” in a letter!

Very soon, “la famiglia” or, “the family” will be on Chad’s mind again, meaning HIS family when he makes a horrifying discovery; and EJ will join him to avenge his wife! After his son Thomas DiMera (Cary Christopher) finds Leo hiding in the mansion, he’ll tell Chad and he won’t need triggering to execute Stefano DiMera-style revenge on Leo!

If Leo thinks the brothers DiMera are angry when they suspect him for killing Abigail DiMera (Marci Miller), “he ain’t seen Jack”! Jack Deveraux (Matthew Ashford) hasn’t always been a good guy- far from it, and he’s killed before when his family was harmed – he avenged Steve when Steve was thought dead! Knowing his daughter was killed in such a gruesome manner, leaving his small grandchildren without a mother may be too much for Jack. No one will be surprised if he goes after Leo for deadly revenge!