GH Spoilers: Nikolas Finally Lets Ava In On His Secret 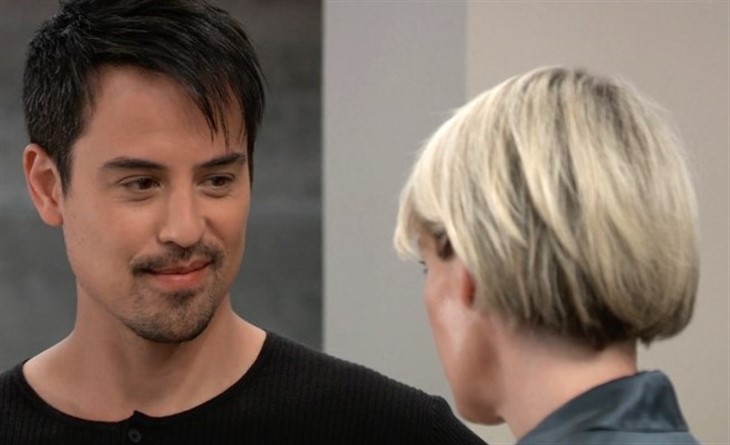 General Hospital spoilers suggest that Ava Jerome (Maura West) will finally understand what Nikolas Cassadine (Marcus Coloma) has been up to. Will Ava forgive Nikolas or has he taken this scheme too far?

General Hospital’s Ava thinks that Nikolas has been siding with Esme Prince (Avery Kristen Pohl) instead of her. Ava wants to work on their marriage and get Esme out of the house. However, Ava doesn’t realize that Nikolas has a plan of his own.

Nikolas has been suspicious of Esme for some time. However, the only way to stop Esme is to make her feel comfortable enough to screw up. Nikolas doesn’t realize how much damage this is doing to his marriage. Nikolas will finally see that Ava is ready to cut her losses and move on. After all, if Nikolas cannot put her first, why is she there? Ava will demand Nikolas choose one more time but will be stunned to hear his answer. What will Nikolas reveal?

General Hospital’s Nikolas Cassadine wants his son, Spencer Cassadine (Nichols Chavez), home with him. Nikolas and Spencer have discussed Esme at length although fans were not privy to the entire conversation. However, it seems that Nikolas may be on to Esme’s tricks. After all, Nikolas has done some greatly underhanded things in the past few years. Perhaps Nikolas knows a bit more than Esme thinks but he probably doesn’t know the whole story. How could Nikolas know that Esme is Ryan Chamberlain’s (Jon Linstrom) daughter? Nikolas may be having Esme watched but finding out that information could be a bit tricky.

General Hospital’s Ava could demand that Nikolas come clean before she packs up and leaves him. Once Nikolas sees how serious Ava is, he may tell her exactly what is going on. Ava may still be upset with Nikolas for not being honest from the start. However, it would greatly set Ava’s mind at ease to know that Nikolas believes in Trina Robinson (Tabyana Ali) and wants to help prove it. Will Ava learn that Nikolas and Spencer have been working together on this plan? Could finding out the truth help Ava see Spencer in a different light?

Nikolas loves Ava and isn’t about to let her go without a fight. How much of the truth will Nikolas reveal to prove that he is on Ava’s side? Will Ava let Nikolas follow through with his plan after she learns the truth?