B&B Spoilers: Quinn Should Move On – Eric’s Days Are Done 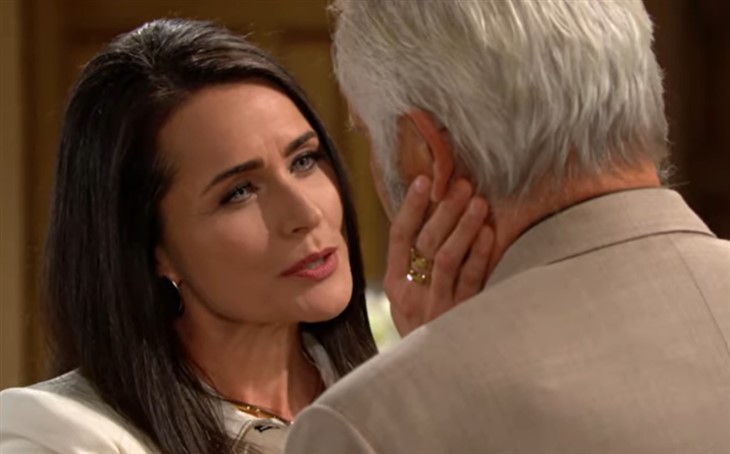 The Bold and the Beautiful spoilers document that Quinn Fuller (Rena Sofer) believes she and her husband share an enduring love. As viewers have seen and Eric Forrester (John McCook) appears to be realizing, Quinn’s assumption might be wrong.

Devoted fans know that Eric and Quinn did fall for each other in the past. Eric stood as a lone voice in his family, arguing in favor of the woman he would marry. But time has tested his decision.

Quinn’s recent cavort with Carter Walton (Lawrence Saint-Victor) shook Eric. He claimed to have gotten over it, but the betrayal has been burning a hole in his soul these past months.

B&B Spoilers: Is Li As Crazy As Sheila?

The Bold And The Beautiful Spoilers – Reenter The Great Donna Logan

Donna Logan (Jennifer Gareis) is great for many reasons. Chief among them is her devotion to Eric, even through his married years to Quinn.

Eric, like anyone who can see, recognizes Donna’s intense physical appeal as well. He recently chose to return to his ex-wife, who boosted his ego.

But Donna has gotten to the point in the plot where she felt compelled to tell the man she lovingly refers to as her honey bar the truth. He should leave Quinn and be with her instead.

Fans of Eric should not forget that he endorsed Quinn’s connection with Carter after learning of it. That pairing and the audience were shocked at Eric’s initial decision.

McCook delivered terrific performances, in a career filled with many through various roles, in the story line where Eric revealed he had been diagnosed with ED. He did not share that news with Quinn due to a sense of embarrassment and concern for his wife.

Quinn did not know what Eric was enduring when she was with Carter. Sofer’s character offered instant sympathy and understanding when she learned what was wrong with her husband. That, along with Eric’s unusual response to her Carter connection, means that she was not pursuing revenge and is undeserving of that now.

Eric has long known as a man of principle. He humbly stated in the past that he was no saint.

Through his many experiences, Eric learned to be forgiving. The basis of his marriage to Quinn involves his belief in her.

So, if Eric is being honest with himself, he will realize that he can not be fully in love with Quinn anymore. Unless that feeling changes, Eric owes it to Quinn to tell her how he feels. She needs the facts to make a clear-minded decision about the future.