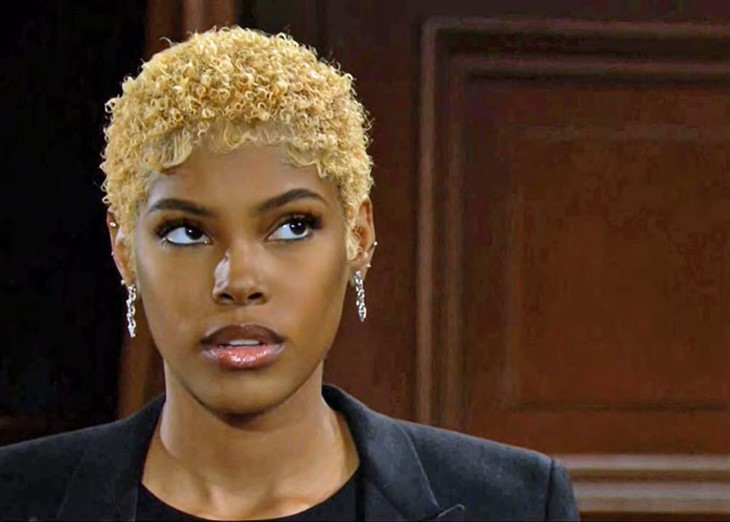 The Bold and The Beautiful (B&B) spoilers and updates tease that Paris Buckingham (Diamond White) will put the kibosh on her meddling mother giving Zende Dominguez (Delon de Metz) false hope! She won’t like it when Grace Buckingham (Cassandra Creech) still tries to pair her with him this week on BOLD!

Previous BOLD episodes revealed Grace is determined to force a marriage between Paris and Zende, even though Zende recently told Carter Walton (Lawrence Saint-Victor) he could have her!  Grace even blackmailed Carter when he and Paris were dating, telling him she would turn him into Ridge Forrester (Thorsten Kaye) for sexual harassment of an employee! Grace wants Paris to marry Zende and she continues to push the envelope on that issue, whether Paris wants him or not!

Grace is stubborn, and she’d gladly pull both Zende and Paris by their ears to the nearest justice of the peace! Then she’d stand there and tell them to say “I do” until they did, lock them in a bedroom and stand guard until she was sure the marriage was consummated!

Grace has the pure unmitigated gall to go to Zende and tell him that she will change Paris’ mind and that she will marry him! She says she knows her daughter better than her daughter does, and Paris is simply going through a wild phase and she can tell that Paris really loves Zende, not Carter! Zende seems a bit skeptical and he asks if she’s sure she’s reading her right, because the last time they had talked about it Paris wanted Carter, not him! She’d even admitted to him that she was seeing Carter when she wanted to regress their relationship and see other people for a while! Grace huffs, Paris had some nerve to tell him that and to try to get the man who cheated on her sister!

It’s clear that Grace doesn’t expect Paris to walk in and interrupt her private conversation with Zende about her, but interrupt she does, and with intention! Zende and Grace learn Paris has been lurking and listening to the whole conversation, and she tears into her mother right in front of him! Paris is not happy that her mother has been spreading lies about her and false hope to Zende, because she has not changed in her feelings!

In fact, Paris is furious – doesn’t she understand that she’s giving Zende false hope and hurting him more than helping him? Paris tells her mother for the last time, she cares for Zende but she doesn’t want to marry him – she is in love with Carter and wants to marry him!

Grace and Paris get into such a catfight over who Paris should fall in love with and marry, that Zende has to intervene and break it up! Does he have to call security to make the two women behave themselves? Zende tells both Grace and Paris that he told Carter himself if he wanted Paris he could have her, and that should be enough! Even Zende knows you can’t force someone to love you, let alone to spend the rest of their life with you! He wants Paris to be happy even if it’s not with him, and Paris says the same thing about Zende!