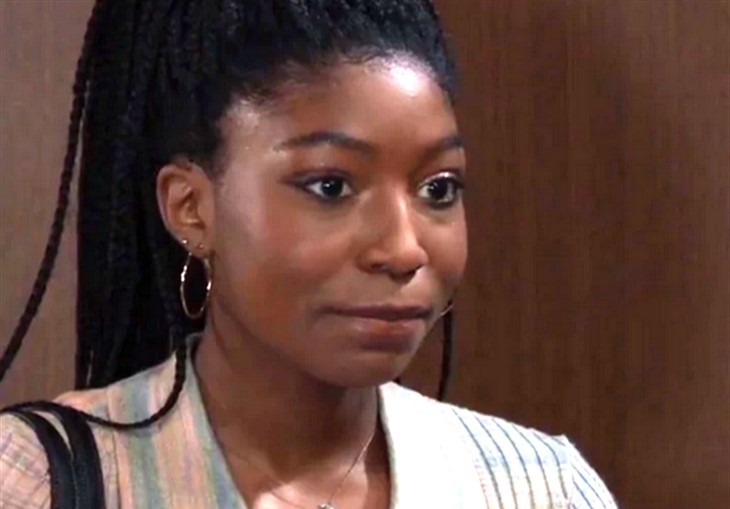 General Hospital (GH) spoilers and updates tease Trina Robinson (Tabyana Ali) has been dealing with many difficult challenges. Trina has been able to turn to the ones that she loves for support. Trina has been able to count on her parents Dr. Portia Robinson (Brook Kerr) and Marcus Taggert (Real Andrews). Trina has gotten support from Portia’s boyfriend Curtis Ashford (Donnell Turner). Trina has been grateful that her friends Josslyn Jacks (Eden McCoy) and Cameron Webber (William Lipton) have stood by her. Trina is facing an uncertain fate because she is in trouble with the law. Trina knows that the ones that care about her are worried about her future.

Trina has been framed for a crime that she did not commit. Esme Prince (Avery Kristen Pohl) filmed Joss and Cameron having sex for the first time and broadcast the footage online. Esme wanted to get Trina away from her boyfriend Spencer Cassadine (Nicholas Chavez). Trina has been trying to find a way to get out of her legal troubles. Portia and Taggert are worried that Trina could face jail time for the crime. Portia may believe that Taggert and Curtis should work together to find evidence to prove that Trina is innocent. Portia and Taggert have wanted Trina to get a good education. Trina could be expelled from college because she is having legal problems. Portia has told Taggert and Curtis that she is afraid that Trina will not be able to have the future that she deserves. Trina does not want Portia, Taggert, and Curtis to be concerned about her.

Trina had wanted to get close to Spencer but has met with resistance from Esme. Trina was worried that Joss and Cameron would believe that she had filmed them but they believed that Esme was the one behind the video. Joss is worried about Trina. Joss has wanted Cameron and Spencer to help her to take down Esme. Trina wants Joss to help her to prove her innocence. Trina has been surprised to get support from Rory Cabrera (Michael Kruse). Trina has started to spend time with Rory. Trina and Rory went on a date. Portia and Taggert were waiting up for Trina and found out about Rory. Portia and Taggert are unsure about Rory but they have not wanted Trina to be around Spencer. Trina may find that she wants to spend more time with Rory. Trina will hope to get Portia and Taggert to support her relationship with Rory.

General Hospital Trina knows that she does not have to face her troubles on her own. Trina hopes that she will get out of her legal troubles. Trina knows that Portia, Taggert, Curtis, Joss, and Cameron want to help her. Who will be able to give Trina the help that she needs to clear her name? Trina wants to explore a relationship with Rory. Trina has tried to put her feelings for Spencer behind her. Trina does not know that Spencer is trying to find a way to help her and bring Esme to justice. Will Trina have to make a choice between Spencer and Rory down the road? Be sure to catch up on everything happening with GH right now. Come back here often for General Hospital spoilers, news, and updates.