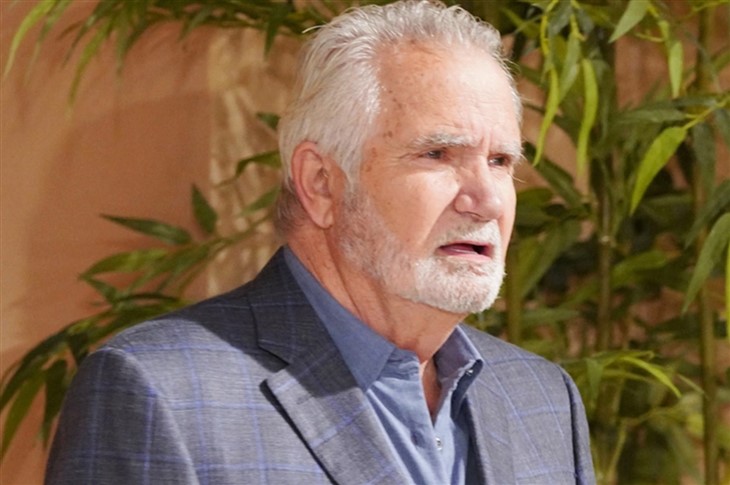 The Bold And The Beautiful spoilers indicate that Quinn Forrester (Rena Sofer) could very well catch Eric Forrester (John McCook) in bed with Donna Logan (Jennifer Gareis). It seems that Eric could suffer a heart attack from all of the exercise leading Quinn to the club. Will a health crisis blow Eric’s pickleball excuse out of the water?

The Bold And The Beautiful Spoilers – Should Eric Forrester’s Heart Rate Be That High?

The Bold And The Beautiful’s Quinn bought Eric a ring that monitors his blood pressure and heart rate. However, Eric has no idea what the purpose of the ring is. While Eric and Donna were having sex, Eric’s stats became so high that the alarm on the ring went off. Should Eric be having these issues while making love? Is this a warning of more health problems to come? Will Eric end up having a heart attack while he and Donna are in bed together? What will Donna do if this does occur?

The Bold And The Beautiful’s Quinn is determined to involve Bridget Forrester (Ashley Jones) in to her investigation. Quinn will involve Bridget out of real concern for Eric’s health. After all, Bridget is Eric’s daughter but she is a doctor as well. Bridget could start asking questions or even accidentally stumble onto Eric and Donna’s affair. Could Bridget possibly rat her father and her aunt out to Quinn? No one in the Forrester family really likes Quinn anyway. However, Bridget may need to find a way to cover Eric’s heart accelerations. Will Bridget find these reactions something of great concern to his health?

The Bold And The Beautiful Spoilers – What Happens If Quinn Discovers The Truth?

The Bold And The Beautiful’s Eric may not have a heart attack until Quinn shows up. Imagine Eric and Donna’s surprise if they are in bed and Quinn walks in. Eric could be stunned enough to have a heart attack from the sheer shock. Eric is also trying to protect Donna who he knows Quinn hates. Quinn and Donna would no doubt get into a huge catfight putting Eric in the middle. If Eric’s heart is truly acting up, any argument between Quinn and Donna could potentially kill him. Eric has been burning the candle at both ends and it will eventually catch up with him. Will Eric survive a heart attack at his age?

Quinn is really concerned about Eric. However, Eric’s betrayal could send her over the edge and back into Carter Walton’s (Lawrence Saint-Victor) arms. Where will Eric’s heart issues leave everyone?