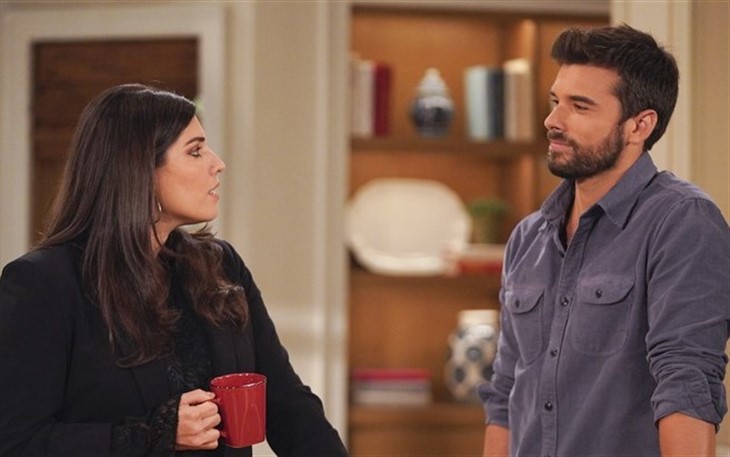 General Hospital (GH) spoilers reveal Harrison Chase and Brook Lynn Quartermaine continuing to dance around the subject of their feelings for one another, but why?

It wasn’t too long ago that Brook Lynn (Amanda Setton) and Chase (Josh Swickard) finally kissed but then they pretended it never happened and are still pretending it never happened. Usually, when a couple finally shares that first kiss, the kissing continues and the pair admits there are feelings there.

Yes, Valentin Cassadine (James Patrick Stuart) and Anna Devane (Finola Hughes) also had a slow build arter their first kiss, but it wasn’t like this. And the only reason the pairing feels like it was dropped for a while is because James Patrick Stuart was filming his Disney series, The Villains of Valley View.

Instead of that kiss moving Brook Lynn and Chase forward, they keep taking 10 steps back and then 10 more steps back. They act like high school students analyzing every text while playing hard to get. Aren’t these people in their 30s? Shouldn’t they be a little more mature by now and figure out how to have a real relationship without constant games, ghosting one another, near kisses they never follow through on…What even is this?

GH Spoilers – Could A Caper Bring Them Together?

Brook Lynn now has Chase enlisted to help her bring down her former manager who claims to own all of the songs she has written. Without her singing voice, this is BLQ’s only link to music right now and she is despeate to get what she believes is hers. Chase was reluctant to help at first, but is all in on it right now, despite the fact that it can mean a career setback.

General Hospital is lucky that Amanda Setton and Josh Swickard have chemistry to spare or else the slow pace of their romance would have turned off more viewers by now. The show needs to take advantage of this and make Chalynn a full-fledged pair already because their love scenes are bound to be better than the pornographic one between Nikolas Cassadine (Marcus Coloma) and Esme Prince (Avery Kristen Pohl) or the bland and boring ones we are constantly fed between Michael Corinthos (Chad Duell) and Willow Tait (Katelyn MacMullen). Hopefully, this caper is what they need to become the couple GH needs.

Stay tuned to General Hospital weekdays to see how this story plays out.