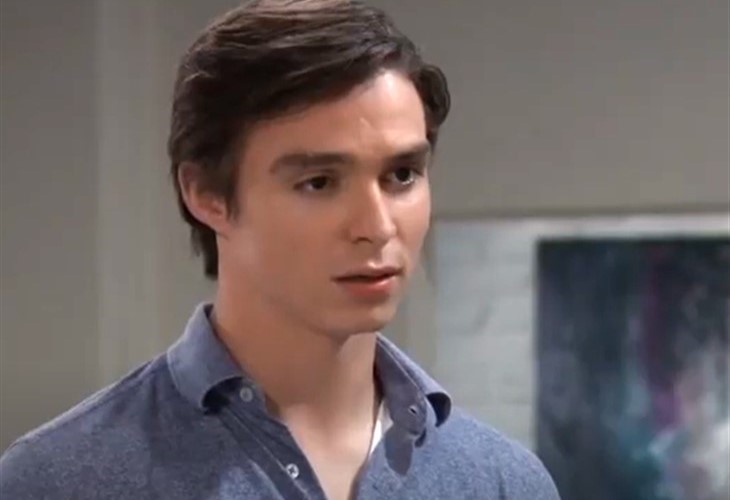 Viewers will recall that Spencer is a jack of all trades and he’s done similar things before – remember, this was the twelve year old who hacked voting machines! He wanted to make sure his grandma Laura Collins (Genie Francis) won the mayoral race; that box of votes never has been found! He also rigged the sprinkler system in the Jerome Gallery to spray fake blood – now he plans to install hidden security cameras that feed to an app on his phone.

With the cameras feeding to his phone he can track every movement in and out of Wyndemere and know exactly when she comes, when she goes, and what she does! He makes sure they’re installed in her room and even in her closet!

Spencer wants to catch Esme doing something or saying something or even looking at something that relates to her frame-up of Trina Robinson (Tabyana Ali). He is pretty sure that the bottle of pills she has in her no longer so secret shoebox relates to the night at the Corinthos cabin on the ski trip. Spencer is sure if he has eyes on her all the time, he can catch her in something – so he makes sure the app will record what comes into it. Spencer also does one other thing – when Esme thinks her phone is charging and she’s asleep he downloads a hidden app in it that also feeds to his! Every criminal eventually messes up and he hopes he catches her bragging to herself about her frame-up of Trina-she does have a habit of doing that when she thinks she’s alone!

Spencer may see things that he doesn’t expect or doesn’t want to see, including the inside of Esme’s purse, since it runs behind the scenes. He wanted to run in the background so it would catch her doing or saying things when she wasn’t at home. Something that chills him to the bone happens when she’s at work at Spring Ridge; she’s talking to Ryan Chamberlain (Jon Lindstrom)!

She talks about having done what he asked and he calls her daughter – he now realizes the birth father her nanny warned her against in the letter is Ryan! Spencer knows that Ryan can talk and he’s faking his locked-in syndrome; he takes the phone to Kevin Collins (Jon Lindstrom)!

The first thing that Kevin does when Spencer shares the recording from the feed is make plans to transfer Ryan back to Pentonville! The second thing he does is tell Spencer that Ryan is probably gaslighting her but just in case, he wants to compare their DNA, and Spencer can get that. He acknowledges that he didn’t know Ryan survived the funhouse explosion in Canada until the DVX contacted him to get his psychotic brother or they’d kill him. Ryan could have been anywhere and with anyone during those years he was presumed dead and a spy; but why is Spencer cyberspying on her? He lets Kevin in on his plan to prove Esme framed Trina and Kevin says Laura needs to know; considering what he’s learned about Esme and Ryan, Spencer says ok!