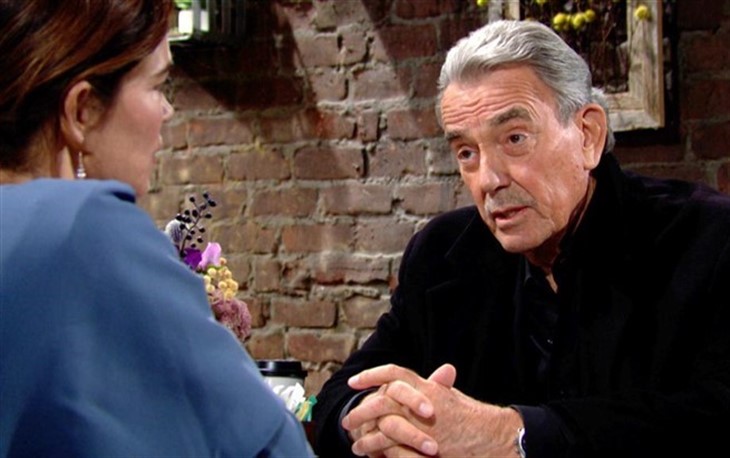 The Young and the Restless (Y&R) spoilers document that Victor Newman (Eric Braeden) did not buy his firstborn’s story. Her claim that a Newman Enterprises underling needed to discuss some unexpected financial issues did not fly.

Victoria Newman (Amelia Heinle) and Nikki Newman (Melody Thomas Scott) touched down in the company jet after a generally successful spa trip to Europe. While the ladies were away, Victor was scheming.

The Moustache did not calculate that his executive office meeting and debrief with Victoria would be the last civil conversation they would have. She was soon to learn Ashland Locke (Robert Newman) was wronged by her father.

Ashland resisted leaving Genoa City, Wisconsin, for as long as he could. He was not sure if Victoria was connected to the restraining order he had received but chose to think that it was all Victor.

Thankfully, Victoria caught her husband in his suite at the Grand Phoenix Hotel before departed. With one suitcase in tow, Ashland had a snarky conversation with the front desk and was ready to check out.

But he did not cross the threshold of his suite before Victoria arrived. He entrance and the talk they had proved transformative.

Victoria never stopped loving Ashland after their fallout. He has been open about how her influence changed him.

She was trying to balance the duplicitous merger scheme Ashland exacted, which was led by his faked cancer diagnosis, verses the feelings he claimed to have developed for her.

As Victoria realized, the many tender moments they shared were not put on. He really did fall in love with her. She was not faking her feelings and reserves a large part of her heart for Ashland.

Te Young And The Restless Spoilers – Victor Newman On The Defensive

Victor made a preemptive move. While Victoria and Nikki were on their brief getaway, he and Michael Baldwin (Christian Le Blanc) were engineering their mutual revenge play.

Both men hold a rightful grudge against Ashland. But that was their mistake.

They rushed into the restraining order plot and assumed that Ashland would leave before Victoria returned or she would be okay with their plot. Neither proved true.

Victoria is giving Ashland a second chance. They are not remarrying but restarting their relationship from square one, with Victor being blocked out.