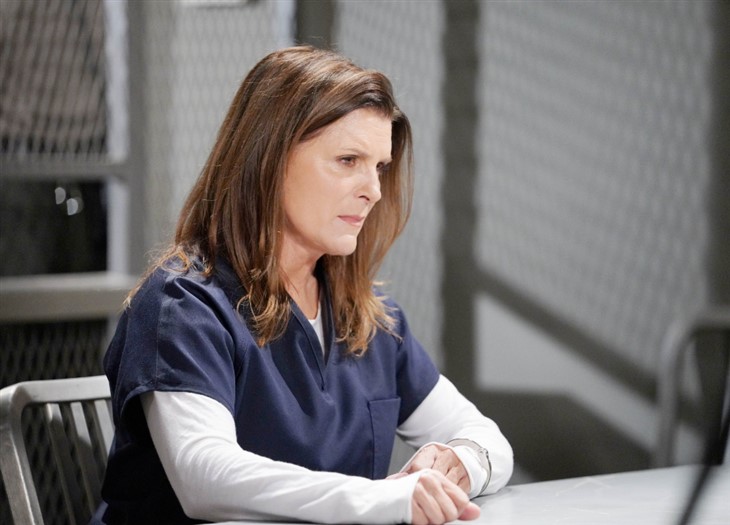 The Bold and the Beautiful (B&B) spoilers reveal Sheila Carter’s entire life turning upside down once again — but in a good way, or so she thinks.

The Bold And The Beautiful Spoilers – A Shocker For Sheila Carter

As far as Sheila Carter (Kimberlin Brown) knows she shot and killed her own son, which is the most heinous thing she has ever long in a decades-long list of heinous things. Of course, in her mind, this is all Steffy Forrester’s (Jacqueline MacInnes Wood) fault for confronting her about switching those champagne labels on New Year’s Eve and getting Brooke Logan Forrester (Katherine Kelly Kang) drunk. If Steffy had not meddled where her nose didn’t belong, none of this would have ever happened.

Ven when confronted by Li Finnegan (Naomi Matsuda), Sheila maintains that she didn’t mean to shoot John ‘Finn’ Finnegan (Tanner Novlan). He just got in the way of things when she was trying to shoot and kill Steffy. It was all perfectly innocent. However, after Li’s visit, things seem a little strange to Sheila. Li refuses to tell her where Finn’s ashes are, in the same way she refused to tell Steffy. Poor Steffy just took her kids and left town, but Sheila wants to do some digging.

Since this is Sheila Carter, it’s no wonder that she is able to break out of jail without much thought. She figures if she just follows Li, it will lead her to where her son is buried and she can say her final goodbyes. But when she gets to Li’s hotel room, she is absolutely flabbergasted to see a comatose Finn hooked up to machines, but still quite alive.

“It’s not a sweet, touching moment,” Kimberlin Brown said in the June 21, 2022, issue of Soap Opera Digest. “It is actually a shocking moment. To open that door and see Finn lying there and breathing is thrilling and overwhelming. She’s not quite sure how to react because Sheila was devastated and crushed thinking her son was gone and now he’s not. Once again, that opens a whole new world of possibilities with her son.”

Of course, Sheila also has to contend with Li and the woman might give her a run for her money. To her, Finn is her son and not Sheila’s son and she wants Sheila out of the picture once and for all, meaning an explosive confrontation is coming up.

Stay tuned to The Bold and the Beautiful weekdays to see how this story plays out.