Days Of Our Lives Spoilers: Leo Turns To Sonny After Being Accused Of Murder! 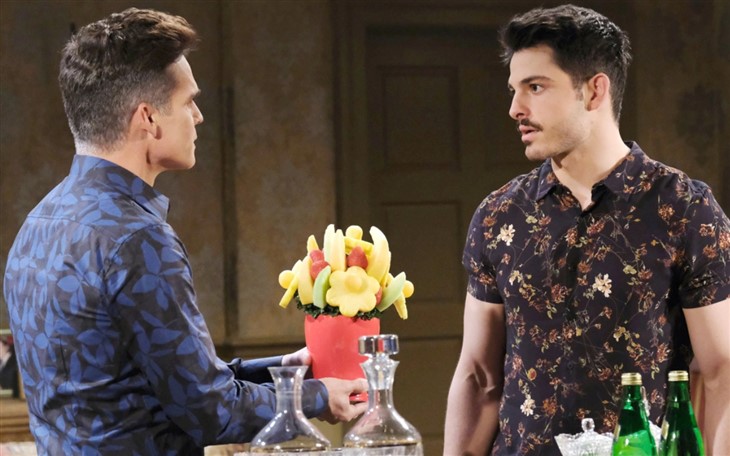 Days of Our Lives spoilers tease that Leo Stark’s (Greg Rikaart) plan to get revenge on everyone who had a hand in ruining his relationship with Dr. Craig Wesley (Kevin Spirtas) is about to take an unexpected turn. Leo has already gone after Sonny Kiriakis (Zach Tinker) and Chad DiMera (Billy Flynn) by finding ways to ruin their reputations. Satisfied for now that he’s taken care of the first two people on his, he has now turned his attention to Abigail DiMera (Marci Miller). But Leo isn’t the only person out to harm Abigail.

Days Of Our Lives Spoilers – Abigail DiMera Is About To Meet A Gruesome End!

Leo had no place to stay so when he heard about the secret room at the DiMera Mansion, it would not only provide him with a base of operations but also the perfect location to get to Abby. But whatever Leo has planned, he’s already made it clear that he isn’t a murderer. But someone does cross that line and Abigail will be murdered before Leo has a chance to do whatever he had planned. But given that Leo has made it clear to anyone and everyone that Abigail was next on his hit list, Leo will likely emerge as the prime suspect.

Leo doesn’t have many friends in Salem except for Gwen Rizczech (Emily O’Brien), who is currently in prison. So, he will turn to the last person anyone would expect: Sonny! Sonny is currently out for Leo’s blood after Leo drugged him and photographed what appeared to be Sonny and Leo having sex! He made sure the photographs were made public and that Sonny was embarrassed and humiliated. But Leo will point out that if he were going to kill anyone, it would have been Sonny. Despite himself, Sonny ultimately decides to help Leo.

Days Of Our Lives Spoilers – Sonny Kiriakis May Hide Leo Stark From The Authorities!

When the police find evidence that Leo was using the secret room at the DiMera Mansion and that Leo had been very vocal about getting revenge on Abigail, a warrant will surely go out for Leo’s arrest. Feeling that he has nowhere else to turn, he will beg Sonny who despite himself will hide Leo. Sonny is no detective so he might very well set up a secret meeting between Leo and John Black (Drake Hogestyn). Not all that long ago, John and Leo were led to believe that John was Leo’s father.

And while John is well aware that Leo is capable of some despicable things, he won’t believe that Leo killed anyone. John will tell Leo that he will investigate but, in the meantime, he will tell Leo to stay in hiding. Since he’s already guilty of harboring a criminal, Sonny will realize that Leo could turn him in so for the time being Sonny will have to protect Leo. Although Sonny and Leo clearly seem to hate each other, perhaps there is more to it. No one would be more than these two if hate turns to passion for these two sworn enemies!

What is Leo’s plan for revenge on Abigail? Will Leo turn to Sonny to help him hide from the authorities after Abigail’s body is discovered? Will Leo ask John to investigate Abigail’s murder and prove his innocence? Anything can happen in Salem so stay tuned to Days of Our Lives airing weekdays on NBC. And don’t forget to check back right here regularly for all your Days of Our Lives news, information, and spoilers!