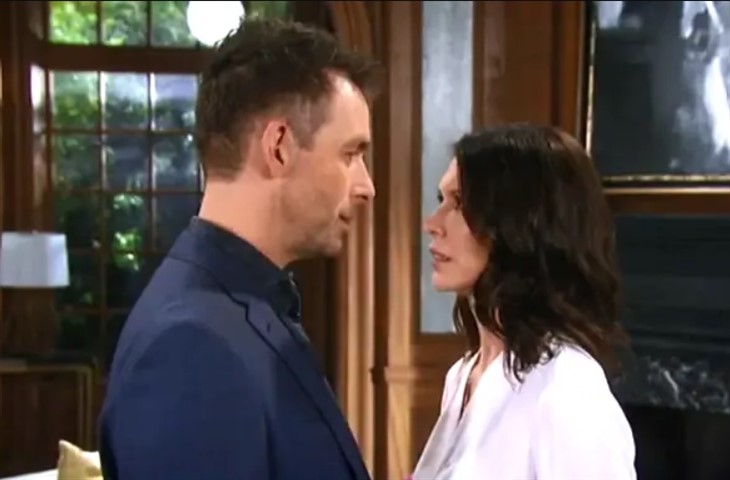 Previous GH episodes revealed that Valentin had a crush on Anna ever since they were in WSB spy school together, and he went by “Ivan Theodore”. He has suffered from a severe case of scoliosis back then, but was one of the best and brightest spy school candidates; and Anna always remembered him with fondness. However, during those days, Anna had no idea she had an identical twin, and “Ivan” was fooled by Alex Devane (Finola Hughes) and he later became involved with her.

Anna would go on to marry Robert Scorpio (Tristan Rogers) while “Ivan” followed Alex, impersonating Anna, to a midwife in Belgium where she gave birth. That baby grew up to be Peter August (Wes Ramsey) and it was many years later when Anna and Alex discovered each other, and Valentin regretted giving Peter to his father.

Valentin and Anna lost track of each other for years, and Ivan Theodore got surgery for his scoliosis and became a mercenary for many years. They both traveled in Cesar Faison’s (Anders Hove) circle but on opposite sides, and they never found each other again until after Faison’s and Helena Cassadine’s (Constance Towers) deaths. Faison, Robert, and Anna were all presumed dead for many years, and it wasn’t until Alex married Dimitri Marick (Michael Nader) in Pine Valley, that either knew they were twins. However, Alex and Anna’s relationship became convoluted and the sisterly relationship devolved into a rivalry. After Helena’s death and Nikolas Cassadine’s (Marcus Coloma) presumed death Valentin took over as Cassadine heir and moved to Port Charles, and he and Anna met again.

Anna dated several others and Valentin married Nina Reeves (Cynthia Watros) but had a side eye on each other the whole time! Some of Anna’s memories started coming back mixed with Alex’s after Faison’s death and she realized Valentin was Ivan Theodore! The two of them interacted frequently, especially when Peter began to become problematic and Anna supported Valentin when Nina left him as he supported her when her relationship broke up.

Valentin and Anna worked together to take down Peter and find Maxie Jones’ (Kirsten Storms) baby with him, and became closer in the process. By the time they discovered Drew Cain (Cameron Mathison) and Victor Cassadine (Charles Shaughnessy) were alive they were falling in love!

After years of knowing and knowing of each other, Valentin and Anna finally are set to go on their first real date! Only two spies can flirt with each other at a target range and make it seem sexy, and that happened in a recent GH episode! Anna’s setting it all up and hinted at wine, romance and maybe even a little hanky panky if Valentin gets lucky, but he’ll need to come clean about French Polynesia. He will make an admission to Anna about that missing piece to the Luke Spencer (Anthony Geary) murder case on this first date, namely “Captain Francois Olivier”!