The Bold And The Beautiful Spoilers: Bill Implies Rivalry Threat – Ridge Ready To Reconcile With Brooke 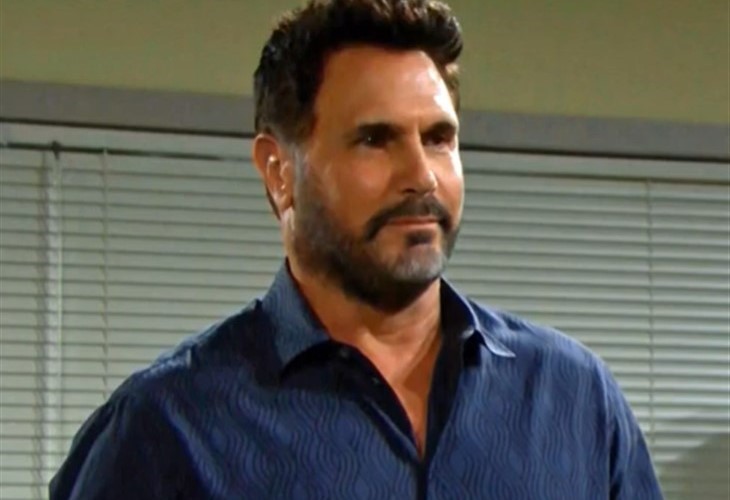 The Bold and the Beautiful spoilers document that Bill Spencer (Don Diamont) took it to Ridge Forrester (Thorsten Kaye). He told the dressmaker, in no uncertain terms, that Brooke Logan Forrester (Katherine Kelly Lang) deserved respect.

Diamont offered a line of dialogue that also implied the return of a longstanding rivalry. Bill told Ridge that he should not allow grass to grow in moving back to the Logan mansion.

Will Bill pursue Brooke in earnest if Ridge does not follow through on his reconciliation plans? Viewers who have a dollar know that threat is real.

The Bold And The Beautiful Spoilers – Deacon Sharpe Is Not Loved

Brooke finds Deacon Sharpe (Sean Kanan) attractive. She would not have kissed him, no matter the proof percentage Sheila Carter (Kimberlin Brown) tricked Brooke into drinking on New Year’s Eve.

It is June, with nearly a half-year passing since the fabled champagne label switch. While Brooke first found Deacon to her liking approximately three decades ago in soap time, she has arguably never loved him.

Ridge was, is, and will likely always be Brooke’s soul mate. Deacon refused to recognize that and has positioned himself to be hurt.

Little did Bill know that while he was busing Ridge’s chops at Forrester Creations, Brooke was kicking Deacon off her property. It was an interesting cross-scene contrast, as the viewers knew more than Diamont’s character.

The above raises a question. Why have Bill behind the story unless Diamont’s character is being written back into conflict with Kaye’s?

Devoted fans know that Bill’s former best friend, attorney, and fixer, Justin Barber (Aaron Spears), switched allegiances. He has been working on the sly for Ridge these past many months. So, possibly that story line angle will soon be mined if no grudge match is being scripted between Bill and Ridge.

Ridge did not want Brooke out of his life. Ridge did not ask Carter Walton (Lawrence Saint-Victor) to draft divorce papers during this separation period.

Fans have been waiting for Ridge to reconcile with Brooke for months. The Sheila reveals provided needed information that allowed Ridge to rationalize forgiving Brooke for the mistake she made with Deacon.

Adding incentive, through Bill’s provocation, should result in Brooke and Ridge re-pairing with their traditional lovey-dovey behavior until the next fallout on B&B.