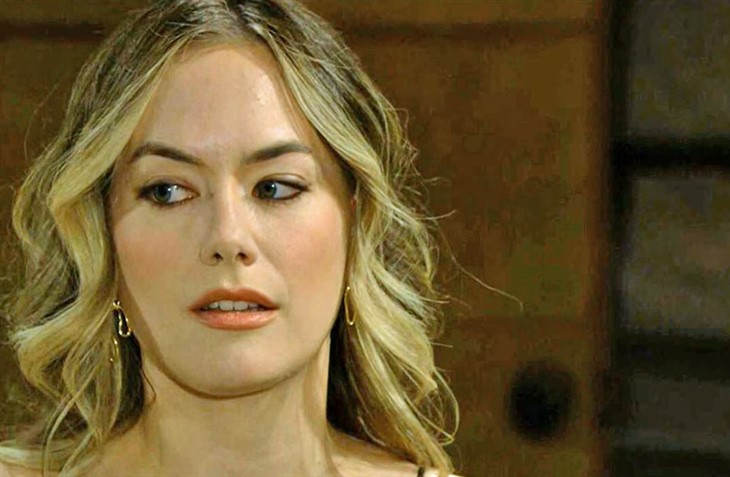 The Bold and The Beautiful spoilers and updates tease that Hope Spencer (Annika Noelle) will catch Eric Forrester (John McCook) and Donna Logan (Jennifer Gareis) during playtime! Hope will spy them engaging in what may be a naked pillow fight in an upcoming BOLD episode!

Hope happens to see Eric and Donna through a partly open window in their bungalow where they’ve been meeting for their secret trysts! Hope is shocked beyond speechless as she sees them having what should have been an extremely private pillow fight, where nothing is left to the imagination! She doesn’t walk in on them while they’re having their fun but she does let them know, separately, she knows Eric’s pickleball games are really Donna playing hide the pickle!

Hope despises the deception or secrecy, and she goes to her Aunt Donna first to tell them if they want a relationship they should go about it the right way! She goes to Eric also, being a little more careful in the conversation with him since he’s her boss!

Hope is angry and disappointed in her aunt and her boss, but she assures them she won’t spill the tea to anyone. She understands that it may be difficult for Eric to break it off with Quinn Forrester (Rena Sofer) but to stay married to her isn’t fair to Donna or Quinn. Previous episodes of The Bold and The Beautiful revealed that Eric has been struggling with that, and had told Donna the affair had to end. But it’s obvious that he can’t stay away from her and if their marriage is irreparable and Donna’s the one who got away, then they should be together and happy! Longtime viewers will remember that Donna and Eric were married for a short time but various factors – and people – drove them apart.

Donna never got over Eric after they divorced, and as far as she was concerned, he would always be her “Honey Bear”. Eric had thought his days as a lover were gone for good when he and Quinn reconciled but he couldn’t become physically aroused – with Quinn! A short time later, however, he found that he could with Donna; so obviously his erectile dysfunction was not caused by anything physical!

Eric had even allowed for an open marriage after Quinn was discovered cheating with Carter Walton (Lawrence Saint-Victor) so that Quinn could have her needs met. Brooke and Ridge Forrester (Katherine Kelly Lang, Thorsten Kaye) had interfered and put the kibosh on that arrangement, however.

Hope continues to encourage Eric to be honest with Quinn about how he feels, and not to continue being married in name only. She also encourages him to not string Donna along if he’s never going to be free to marry her. It’s not fair to Quinn, it’s not fair to Donna, and it’s certainly not fair to Eric himself! Everyone deserves to be happy and if Eric and Donna make each other happy, they should be together honestly and not on the sneak!