The Bold And The Beautiful Spoilers: Sheila Learns Finn Is Alive! 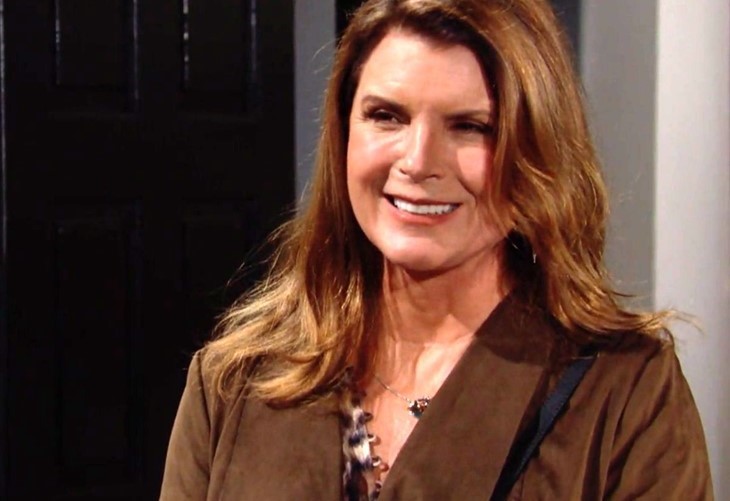 The Bold and The Beautiful spoilers and updates tease that Sheila Carter (Kimberlin Brown) will learn her son is alive in upcoming episodes of BOLD!

The Bold And The Beautiful Spoilers – Li Finnegan Tears Into Sheila Carter, Slips Up

Li Finnegan (Naomi Matsuda) went to confront Sheila in her jail cell before she was to be transported to prison, but Li slipped up in the midst of their argument! Sheila lost it when Li called her evil; but she caught her using the word “is” in reference to her dead son John “Finn” Finnegan (Tanner Novlan). Sheila picked up on that right away – and confronted her with why she was saying “is” with Li crying out that because of Sheila he was “gone”!

Then Li stormed off in a huff and a jail guard came up behind Sheila, telling her it was time to go. She turned around, pleasantly surprised to see it was her old friend Mike Guthrie (Ken Hanes)!

Mike helps Sheila escape LA County Jail shortly after Li leaves; and Sheila is anxious to find where Finn’s final resting place is so she can at least pay her respects. Still, that terminology of “is” instead of “was” from Li puzzles Sheila; she’s determined to follow her to wherever she’s going. Sheila may have Mike’s help in finding where Li lives, but she’s a pretty good tracker herself and finds where she’s at pretty easily. Sheila is one determined woman when she puts her mind to it, and she’s determined to find wherever Li has her son because the shrew wouldn’t even let her say goodbye! Sheila thinks Li has some nerve to turn her back, you don’t turn your back on Sheila Carter and get away with it!

The Bold And The Beautiful Spoilers – Seek And You Shall Find

Sheila makes her way to Li’s home with some help from Mike, thinking Li must be very naïve to think that she couldn’t get out from behind those bars! She just walks right in through the door behind the distracted doctor and Sheila is shocked, pleasantly, by what she sees: Finn is in a bed hooked up to machines! Specifically, he’s hooked up to life support machines and she knows Li’s faked his death!

Sheila knew there was something up with Li’s referring to Finn in the present tense! Sheila calls Li out on her deception and lies regarding Finn’s “death” – and as a nurse she knows faking a death certificate is illegal!

B&B Spoilers – Sheila Carter Is Thrilled Her Son Is Alive, But Will He Come To?

While Sheila is thrilled that Finn is alive, albeit on life support, she knows the real question is if he’ll come to – she doesn’t know what condition his brain’s in. Sheila can almost see the wheels turning in Li’s brain – she reminds her if she calls the police she’s busted too! Sheila knows that it’s a waiting game just like happened with Steffy Forrester Finnegan (Jacqueline Macinnes Wood) only much more serious; Li is more evil keeping Finn’s survival from Steffy! Sheila WILL have a relationship with her son and his son – her leverage over Li will ensure it!